What are PR leaders and executives thinking about for this year?

Industry pros face many challenges, from the continued fragmentation of news media outlets to a contentious political election. However, many voice optimism about the future of communications.

We spoke with T. Garland Stansell, incoming chair for PRSA’s National Leadership Board; Fred Cook, chairman of Golin and the director of the Center for Public Relations at USC; and Cheryl Gale, president and chief client officer for March Communications, to get a cross section of views about the year ahead for PR pros.

[FREE DOWNLOAD: How to earn—and keep—executive support for a new intranet]

Here are some of their top predictions for the year ahead and recommendations for how PR pros can hit the ground running:

What can brand managers do to win new fans in 2020? A bit of humor might be the best place to start. In the USC Annenberg School’s 2020 Relevance Report, respondents say they want to hear from entertainers and funny brand personas.

“When we asked what kind of podcasts they would listen to, comedy was first on the list. We asked what advertising spokespeople they wanted to hear more from and [AllState’s] Mayhem was No. 1, and the Geico Gecko was No. 2.”

Stansell says the key challenges PR pros face in 2020 are innovation and change.

“We’re in this world that expects a response immediately, and the day of any kind of 24-hour news cycle is gone,” he says. “It’s now maybe a 24-second news cycle, so how do we address that in a way that is meaningful and relevant?”

“Not only do we see shrinking newsrooms, but we see—in the corporate sphere, in the agencies sphere—not only are we public relations, but we are marketing and we are advertising. We are every aspect of communication,” says Stansell.

“Storytelling is going to be even more important,” says Gale, adding that if an organization wants to break through the noise, its message must be authentic.

“If it’s not authentic to who you are as a brand and as a company, people are going to see right through it and think that you’re just saying the things that you think you should say versus the things that are really who you are,” she says.

As an example, Gale points to her agency’s work in tech PR with companies that can do a little “whitewashing.” Her advice for 2020: Avoid the razzle-dazzle, and just tell a simple story.

“I really feel like the current political environment has made people think about being more human,” says Gale.

Who will be relevant to audiences in 2020 is also changing.

As part of its annual Relevance Report, USC conducted a survey to discover who people want to hear less from in the coming year.

In the modern media climate, many people want to hear from people they feel they can trust. 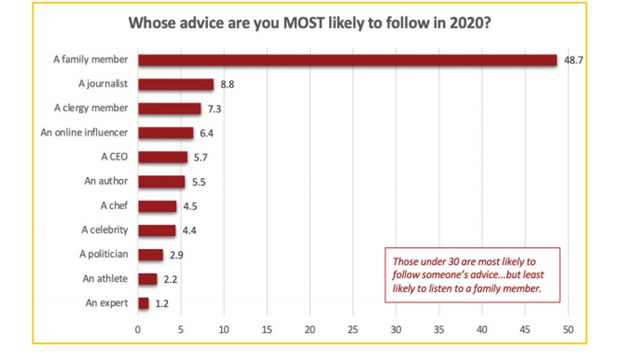 “I hate where we went years and years ago, when we were like: ‘Every organization needs to hire two people of color,’” Gale says. “That’s not what it’s about. You still want to hire the right people for your organization but are probably excluding populations and not even knowing that you are. So how can we educate ourselves to include those populations?”

These efforts will require leaders and brand managers to invest some money. Gale plans to bring in a consultant to investigate how her agency can make sure it has a welcoming culture for diverse viewpoints and backgrounds.

“We all do trivia together, and we all do our Christmas party, our summer outing, but I think that there are many other ways that we can help more diverse populations feel more included,” she says.

“As a society, we need to pay even more attention to the inclusion piece,” he argues. “Diversity is a given. We are a diverse world, a diverse people. We have diverse thoughts, diverse background. So diversity is there. It’s just [about] what we do with it and how we embrace it.”

Which new technologies are you going to bring into your organization? With the rapid pace of change that technology has brought to so many industries, one of the hardest challenges can be knowing which new tool (or toy) is worth investing in.

Stansell allows that there is a lot going on with augmented and virtual reality, but he stresses that the most important technology for communicators will probably be artificial intelligence.

Not only must PR pros understand how AI will affect their clients and organizations, but Stansell argues that the technology will have profound impacts for communications work itself. That doesn’t mean preparing for robots to take your job, but it will require communicators to become more tech savvy.

“It’s a high touch industry, and we’re never going to go away from it being a high touch profession. But that’s not to say we can’t also be high tech, and we need to be,” he says. He likens the change to the emergence of social media over a decade ago: “It didn’t do away with a lot of the other things that we do, but it certainly changed the way that we perform our jobs.” 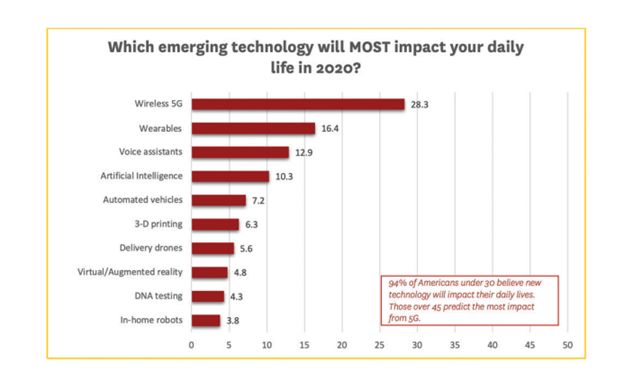 How we value PR

One point of emphasis in 2020 for many PR pros will be how to communicate PR’s value to clients and company leaders. Gale, in particular, wants 2020 to be the year that PR pros stop using payment models where clients pay per press clipping or mention.

“I will personally help kill it in 2020, because it really devalues our work,” Gale says. “It puts us in the media-relations-only bucket.” She adds that it also perpetuates a false notion of how PR works. “Our work is really strategic and smart, and yet a lot of the output does end up being maybe that piece of coverage … but it’s an entire campaign and how that message got out. It’s about creating a message, the narrative, thinking about the different types of people that you want to hear that message.”

Stansell says: “It’s even more imperative, given that we’re in contentious times, that public relations professionals are grounded in ethics.” Even in a fractured media environment, he advocates for fairness, transparency and honesty.

“I think there’s a place for honesty and fairness, representing things honestly and fairly,” he says, adding that PR pros don’t have to take a back seat on fighting for their values. “We can advocate for civility,” he says. “We can also continue to advocate for ethics, for free flow of information, for transparency.”

Where there is hope

Stansell says students and new PR pros give him hope when he thinks about the future of communications. He says he likes seeing “our young professionals and seeing their ability to embrace the rapid changes, seeing how smart they are.”

“It may feel different than we have known it in the last 10 years, last 20 years,” Stansell says, “but that’s a good thing. … We need to change.”

“There was a sense of optimism and hope that was pervasive,” he says. “I think if your message shares that sense of hope, that will resonate with consumers, because they’re looking for that sort of message.”