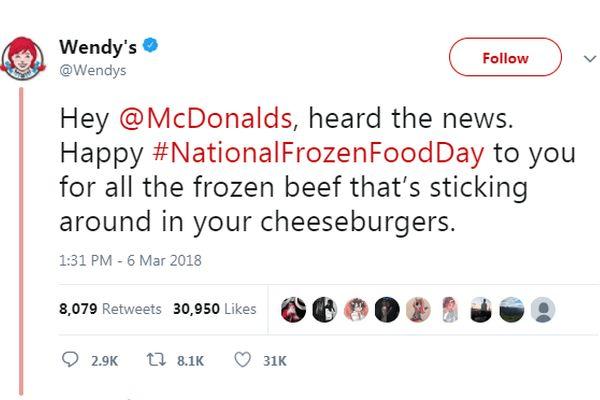 Wendy’s never pulls a punch—at least not on Twitter.

On Tuesday, McDonald’s announced it would begin the rollout of fresh-meat Quarter Pounders to selected restaurants, with the full change coming to all its locations by May.

The fast-food giant, which has relied on frozen patties since the 1970s, said workers will cook up the fresh beef on a grill when the burger is ordered.

Many noted that Wendy’s has been trolling McDonald’s for its use of frozen beef, including a savage Super Bowl ad that derided the practice.

Fresh beef has always been used by rival Wendy’s, which aired a Super Bowl commercial last month criticizing the “flash frozen” beef at McDonald’s. A Wendy’s Co. representative gave a frosty response Tuesday, saying that “it’s awesome” that McDonald’s “is recommitting to using frozen beef on the majority of its hamburgers.”

Others noted that the move comes in response to a general industry trend toward fresh ingredients.

“This coincides with a national consumer demand for items that they perceive as healthier and higher quality,” said Ernest Baskin, an assistant professor of food marketing at St. Joseph’s University.

Yet, Wendy’s wasn’t about to cede ground to McDonald’s, and it took to Twitter to sound off—and score points.

Hey @McDonalds, heard the news. Happy #NationalFrozenFoodDay to you for all the frozen beef that’s sticking around in your cheeseburgers.

Wendy’s threaded a message showing all the McDonald’s sandwich options that are still prepared with frozen meat.

And this one? Beef’s still frozen. pic.twitter.com/YLWUCJNdFs

This one too? Yep. Doesn’t even have a slice of cheese to keep it warm. pic.twitter.com/8EeNTmnop6

Though many acknowledge that Wendy’s is going negative in its attacks on McDonald’s, the deft tone of Wendy’s snark keeps readers from turning away.

The shade is impeccable.

Wendy’s stays ready to reply to comments, ensuring it never misses an opportunity for a zinger.

When their beef thaws

Still, the change for McDonald’s is nothing to scoff at. The giant chain has had to tweak its enormous supply chain and get buy-in from thousands of stakeholders.

Since McDonald’s is a behemoth with 14,000 U.S. locations that are mostly franchised, switching to fresh is not so simple. After finding a recipe, McDonald’s had to convince franchisees it’s worth the effort, and get workers ready to make the burgers. It has taken four years to go from the idea of serving fresh beef patties to making it a reality across most of the company’s U.S. restaurants. The burgers won’t be available in Alaska, Hawaii or U.S. territories.