The World Wide Web has changed the nature of articles, and Porter Novelli Radar demonstrated that with its proprietary report on both traditional and social media coverage of a system outage that grounded Delta Air Lines flights on August 8, 2016. The coverage has earned Porter Novelli Radar first place for best article in PR Daily’s 2016 Content Marketing Awards.

Porter Novelli Radar is a reputation management and issues monitoring service, part of the Porter Novelli PR organization. While Delta Air Lines was not a client, the team saw an opportunity to show off its media monitoring and analysis capabilities by producing a report on the incident.

Producing the report began with reviewing more than 13,000 articles, 30,000 broadcast segments and nearly 150,000 tweets in order to identify the key trends emerging from the coverage and conversation. The report—available to Porter Novelli Radar clients—was presented in a modern web design and featured collections of broadcast reports presented in video format.

The narrative addressed the long-term impact on Delta’s reputation as well as the context of a larger, industry-wide problem. The social media analysis focused on passenger criticism of the airline, rumors circulating about the cause of the outage and the tendency of some passengers to remain positive during their ordeal. Samples of tweets in each category were presented carousel-style.

For an outstanding report, congratulations to Kaylea Notarthomas, Chrystine Fox, and Emily Watson. 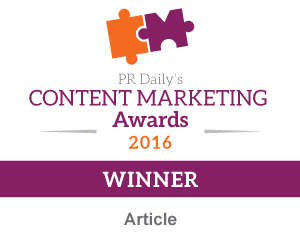