Life360’s Family Locator application is a mobile app that enables family members to instantly find each other anywhere in the world and send news that they’re safe.

But on March 11, 2011, an earthquake and resulting tsunami rocked Japan, stunning the world.

As people both in Japan and around the world feared for family and friends caught in the disaster, the PR team representing Life360 saw its opportunity to help.

For its swift work in creating a useful, timely, and lifesaving campaign on behalf of Life360, Vantage Communications earned top honors in the Best Response to Breaking News category of PR Daily’s 2012 Media Relations Awards.

As in any disaster situation, media coverage of the earthquake and tsunami was predominantly negative. Seeing the opportunity and need for help and a more positive story, Vantage pitched local San Francisco news outlets, explaining the app and how it could bring affected families peace of mind during the tragedy. Vantage also located a Japanese student living in the United States who used the app to communicate with her family in Japan during the disaster.

Vantage pitched TV news stations in San Francisco because of the visual nature of the situation and use of the app, and because Life360 executives were in the area and could be available for interviews. Vantage also hoped that if San Francisco stations aired the story, affiliates across the country would run it as well. They did.

Before the disaster, Life360 was downloaded at a rate of 3,000 to 5,000 times per week. Vantage’s goal was to increase that number by 50 percent within three months.

Within the several weeks following the earthquake and tsunami and Vantage’s campaign, the download rate increased by 4,200 percent, at one point reaching 125,000 downloads in one week. 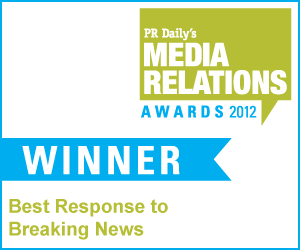