A 150th anniversary campaign using online tools to engage employees, share stories of the past, and teach about the company’s ongoing importance earned Union Pacific Railroad Company top honors in the category of Best Use of the Internet or Digital Tools in PR Daily’s 2012 Media Relations Awards. We congratulate the corporate communications team responsible for the winning effort.

The company, which laid its first rail 150 years ago while Abraham Lincoln was president, is dedicated to serving the nation for the next 150. To celebrate its milestone anniversary, the Union Pacific team wanted to use the Internet to do more than just tell people about its anniversary. It wanted to invite them to be a part of the celebration.

It wanted the celebration website, UP150.com, to be the heart of the campaign and to use social media to disperse content.

The website has three main components: an interactive timeline, a living archive where railroaders and the public could share stories, and a video contest centered around its “Great Big Rollin’ Railroad” theme song.

The Union Pacific team used Twitter, Facebook, social media advertising, QR codes, and a trivia app to promote the campaign. UP150.com was the primary source for promoting anniversary events and a major tool for pitching the media.

In less than a year, the website had more than 2 million page views, video entries were viewed nearly 420,000 times, the “Great Big Rollin’ Railroad” ringtone was downloaded more than 33,000 times, Facebook activity increased more than 150 percent in one month, and the organization had almost a 60 percent increase in Twitter followers.

Nearly 2 million people participated in more than 130 anniversary events, and more than 3,000 news stories, most of which mentioned UP150.com, had a potential reach of almost 500 million people. 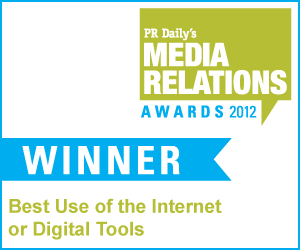