A commercial during the Super Bowl—or in the case of Esurance, immediately after the Super Bowl—is pretty much a guarantee to get people talking about your brand.

Esurance took its Super Bowl moment to an entirely new level, though. Its ad invited people to use the #EsuranceSave30 hashtag for a chance to win $1.5 million. The giveaway, along with the ad placement, and some really smart digital support—blogs and videos—led to Esurance owning Twitter for the next 36 hours.

More than 200,000 people tweeted the hashtag within one minute of the ad airing. By the end of the 36-hour period of the giveaway, more than 5.4 million tweets included the hashtag.

The purpose of the campaign wasn’t to get people to call in for a quote or sign up for an account. It was just intended to make people aware of the brand. A total of 2.6 billion social impressions, 180 pieces of news coverage, and 250,000 new followers says that mission was accomplished. That huge impact is the reason Esurance’s campaign, by agency partner Leo Burnett, is the winner of the Best Use of Social Media category in PR Daily’s 2014 Media Relations Awards.

This is the campaign other brands will be trying to replicate for years to come. 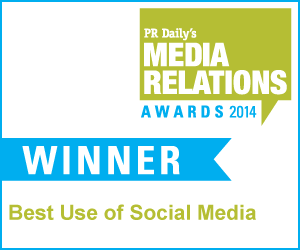