Lots of bad guys exploit weaknesses in online infrastructure to steal everything from money to data. One popular approach is to inject malware into content associated with celebrities. To draw attention to the growing threat and educate consumers on how to protect themselves—while positioning itself as an expert in the field—Intel Security developed its Most Dangerous Celebrity campaign. Its success has earned it a Grand Prize for campaigns under $50,000 in PR Daily’s 2016 Media Relations Awards.

While the celebrities’ own content is usually safe from malware, some criminals create look-alike content with similar URL and domain names not owned by the celebrities that would come up in searches. Intel Security’s PR team developed an integrated campaign that included traditional and social media to get the word out while positioning its own consumer security software as a solution.

The celebrities on the list drew coverage from media outlets that don’t usually address these issues—country music magazines, for example, which were sent lists of the most “dangerous” country musicians. Media in India got a list of celebrities of Indian heritage. The primary list includes celebrities with massive fan bases, like Britney Spears, Jay Z, Katy Perry, Amy Schumer and Betty White.

The lists earned 1,494 pieces of coverage, including 564 broadcast segments on TV shows such as “Jimmy Kimmel Live” (which reached more than 100 markets) along with coverage on celebrity website Perez Hilton and AP coverage that reached more than 350 outlets. Targeted lists earned strong coverage regionally as well. On social media, the hashtag #RiskyCelebs was used nearly 10,000 times.

For a clever approach to dealing with a technical issue that usually bores the average consumer, congratulations go to Intel Security’s Brandie Claborn, Jaime Le and Mary Salvaggio. 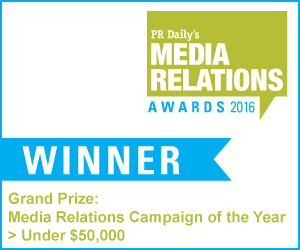