The communicators at American Family Insurance dug deep into data to build a case for CEO Jack Salzwedel to join the growing number of leaders who have become “Social CEOs,” engaging with their stakeholders directly through social media channels. Their success has earned American Family Insurance first place in the “Executive Visibility” category of PR Daily’s 2017 Media Relations Awards.

Among the data points the communicators’ research uncovered was the fact that 82 percent of customers trust an organization more when its CEO is active on social media, 76 percent of employees would rather work for a social CEO and social CEOs are perceived as better leaders and communicators by their employees.

The channels Salzwedel employed on a daily basis included Twitter, LinkedIn, a blog series focused on leadership that appeared on public social media as well as the organization’s intranet, and podcasts that featured the CEO and guests talking about issues like leadership, culture and philanthropy. Salzwdel’s Twitter following grew by 23 percent as a result, the audience for the podcast grew and posts attracted respectable readership.

Even more important, the effort brought Salzwedel to the press’s attention, resulting in a significant number of earned media placements hailing the CEO for his social media presence.

For their work at transforming Salzwedel into a social CEO, congratulations to Jack Sazlwedel, Tom Buchheim and Michele Wingate. 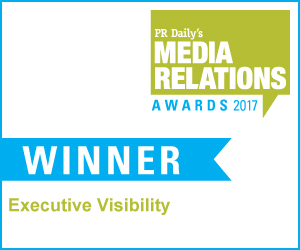