Bank of America’s Cash Rewards credit card competes in a crowded field. Driving awareness of the card and its benefits meant cutting through the noise generated by all its competitors. The success of Bank of America and its PR partner Burson-Marsteller in doing that has earned it first place in the “Integrated Marketing Communications” category of PR Daily’s 2017 Media Relations Awards.

Bank of America and Burson-Marsteller dove into three omnibus surveys that looked at consumers’ intended spending habits during the summer, fall and holiday seasons. Among them: home redecorating, tailgate or holiday parties and other activities. The surveys also revealed a desire to keep expenses down.

In addition to the surveys, the team also studied spending and transaction data from the bank’s base of 40 million card users to compare what people intended to buy with what they were actually buying. The data led the team to focus on do-it-yourself (DIY) projects and to recruit DIY subject matter experts Ben and Erin Napler (popular hosts of an HGTV DIY show).

Congratulations to the team of Bank of America and Burson-Marsteller 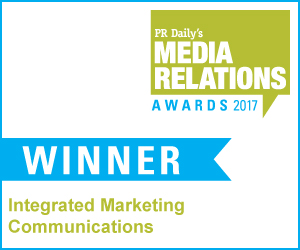