Victor Santos is an American success story. The CEO of Airfox—a pioneering financial technology startup that emerged from the Harvard Innovation Lab—graduated from college, worked for Google, founded two startups, employs dozens of people and contributes to technological advancement and society. He was also an undocumented “dreamer” and DACA recipient. Sterling Communications, which signed on with Airfox in early 2018, saw an opportunity to share Santos’ story while creating awareness of Airfox’s product, a free mobile application that extends vital financial services to billions of underserved people in emerging markets worldwide. The resulting success has earned Sterling first place in the “Executive Visibility Campaign” category of PR Daily’s Media Relations Awards.

The campaign featured media outreach, pitching Santos’ firsthand experience growing up as an undocumented immigrant and how it fueled his passion for financial inclusion to an extensive media list. The team also placed Santos in several high-profile speaking engagements and positioned him as a source for stories related to his areas of expertise.

The campaign resulted in an increase of more than 300% in media coverage featuring Airfox and Santos, with features appearing in outlets like Bloomberg, Forbes, Fortune and more. His bylined articles appeared in The Guardian, Digital Journal and other industry publications. He also earned several awards based on submissions from Sterling, including the Forbes 30 Under 30. 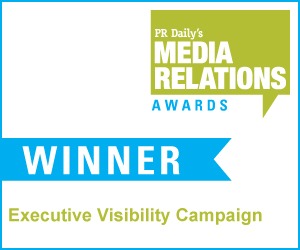