Content silos are crumbling and marketing is making inroads into areas owned by communications.

This cross-disciplinary tug of war isn’t new. Yet, the PESO model can now help you toe the line and even gain ground—all while creating scroll-stopping content for any audience, including internal.

Here are three ways to put the weight of the PESO model behind your work. These insights are featured in the “PESO Model for Communicators” training video now on Ragan Training. The session features insights from the creator of the PESO model, Gini Dietrich, as well as Sukhi Sahni, vice president of communications with Wells Fargo and Nicole Moreo, head of U.S. Analytics with Ketchum.

The PESO model is a strategy that integrates paid, earned, shared and owned media to deliver integrated marketing programs.

“At its most basic, it’s a framework that can help communicators tell a multi-channel story that reaches all your audiences,” says Dietrich. “PR and marketing both have significant areas of influence across the PESO spectrum, but PR usually lives in the ‘earned’ media space and marketing usually owns ‘paid’ and ‘shared.’”

Communicators often feel like “content pumps.” The PESO model can help you focus on the bigger picture so you’re more of a strategist than tactician. 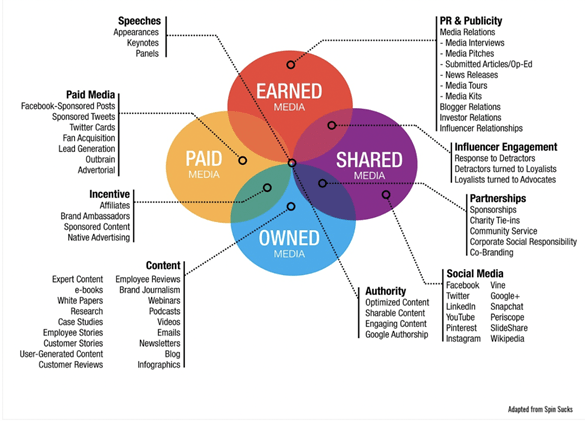 2. Protect and promote your part in PESO.

“The pandemic has driven us more toward integrated communications,” says Wells Fargo’s Sahni. That’s a sentiment that saw agreement from all the panelists.

“People were forced to ask different questions, which opened the door to different channels and data sets being shared,” adds Ketchum’s Moreo. “That brought us to a place where there’s an increased willingness to expand beyond our silos.”

That integration will only continue, according to studies like the “Global Communications Report,” published recently by the USC Center for Public Relations. “Almost half of PR pros and over 60% of marketing executives believe their disciplines will become more closely aligned in the next three years,” says Fred Cook, director for the center and chairman emeritus for Golin, framing the trend for the report. “Some think PR will dominate. Others think it will be dominated.”

Dietrich’s take is that communicators and PR pros should own PESO.

“Our jobs are about relationships and understanding our audiences,” she says. “We need to assert control by showing our value and contribution across the entire PESO spectrum.”

That comes from understanding PR’s unique value in the PESO model.

“Start to speak to the whole process across the media landscape and how you drive it,” she says. “Owned media begets earned media, which increases search results, which gets you more earned media, which provides more things to share on social and the opportunity to boost content and do native advertising.” 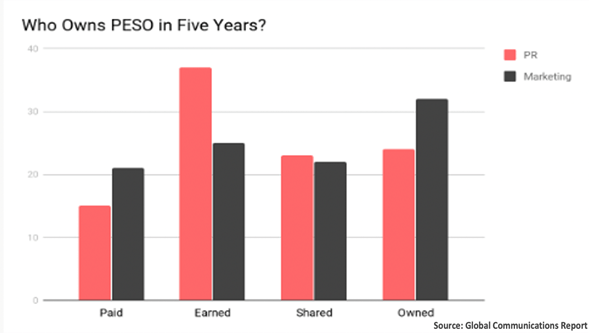 Internal content can also be shared outside the organization and drive paid, earned or shared media. An employee recognition post, for example, could easily be shared on social media for employer branding purposes.

“Take baby steps into PESO,” Dietrich advises.  She suggests starting with what you have control over, such as owned media and then use earned media to “rubberstamp it,” shared media to promote your owned media content and paid media to amplify your message.

Sahni sees it the same way.

“Pick one thing and be gradual about it,” she says.

“Remember that you’re not just a doer. You’re a strategist and can contribute to conversations across the PESO spectrum. When you have data to back you up, you’ll be heard and listened to.”

Brian Pittman is the Dean of Ragan Training and a Ragan Communications event producer. For more information about Ragan Training, contact him at brianp@ragan.com.