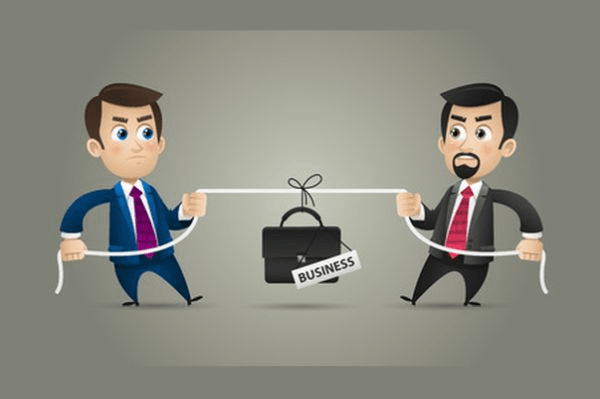 One of our clients introduced a new product to the marketplace 10 years ago. The product was wildly successful—and for most of the decade, they had the marketplace to themselves.

Then, suddenly, a couple of competitors released their own versions of the product. Unlike the client—a relatively small and independent manufacturer—the competitors have big marketing budgets designed to quickly capture a sizable share of the market.

The competition may not be an existential threat to a small manufacturer, but it’s a real one. They were upset. They did the hard work of introducing a new product and creating a market that hadn’t previously existed—and now their competitors were swooping in to profit from their hard work.

Reporters started asking the smaller company about their outsized competition. The smaller client didn’t want to project anger or anguish—neither is in their company’s DNA—but they felt disingenuous pretending that they were happy about it.

Here’s an approach that would have allowed them to be honest, but not petulant:

“It’s no surprise that after releasing our product 10 years ago, others would take notice of the customer response and come out with their own versions. We’re going to continue doing what we’ve always done—making the highest-quality product in the marketplace while refusing to take even the shortest of shortcuts. Our customers value our track record of investing in our employees and our community and know what quality looks like—and we’re going to keep delivering it for them.”

1. It diminishes the reporter’s storyline.

The opening three words (“It’s no surprise”) are intended to shift the story’s narrative by acknowledging the obvious. Without those words, the storyline would almost certainly include a dash of David-versus-Goliath hyperbole with phrases such as “challenging turning point,” “major new threat,” or the dreaded question: “Can they survive?” Beginning with “It’s no surprise” is an attempt to recast this story as far less dramatic—and thoroughly anticipated.

2. It casts the story as one of leaders and followers.

The clear implication in the opening line is this: We’re the originals; they’re hitching their wagons to our star.

3. It invokes the notion of shortcuts.

This statement focuses squarely on the company’s commitment to quality and never accuses its competitors of taking shortcuts. Yet, the mere mention of the term “shortcuts” injects a contrast into the reader’s mind, and therefore, into the media bloodstream. If asked in a follow-up question whether it thinks their competitors are taking shortcuts, the company could plausibly deflect the charge—and offer an example of its extraordinary manufacturing process that sets its product apart.

4. Remind customers that their purchase supports an independent company that treats its people and community well.

It’s never stated that many big corporations don’t share that same commitment—but the implication cuts through.

Given the four points above, this final point might seem like a contradiction, but re-read the statement above. Two of the three sentences focus solely on the company’s commitment to quality. The other sentence (the first) acknowledges the competition but doesn’t attack it. Yes, there are implications and differentiators in the statement—but not a single sharp elbow.

What would you add or change to this statement, PR Daily readers?

Brad Phillips is president of Phillips Media Relations, which specializes in media and presentation training. He is author of the Mr. Media Training Blog, (where a version of this article originally appeared) and two books: “The Media Training Bible” and “101 Ways to Open a Speech.”