LifeSci Advisors (LSA) brought in The TASC Group when an after-hours party at a conference drew sharp criticism and threatened the reputation of the life sciences investor relations organization. TASC’s efforts to salvage the organization’s good name have won it first place in the “Cause Advocacy Campaign” category of PR Daily’s 2017 Corporate Social Responsibility Awards.

The problem: The firm had hired models in minidresses to mingle with the mostly male crowd at an after-hours event. Two female industry executives published an open letter criticizing the move.

TASC began its reputation repair work by creating a campaign designed to build substantive, long-term change in gender diversity within the industry. The campaign began with a public apology and a private meeting with vocal critics to demonstrate LSA’s sincerity in driving change. That sincerity manifested in the introduction of an Advisory Board on Gender Diversity, composed of life sciences leaders who would guide LSA’s work.

Under TASC’s guidance, LSA also partnered with advocacy organizations and committed to internal culture change. The organization’s co-founder was added to programs where he spoke on the issue; he ultimately was positioned as a thought leader.

The organization also launched a Board Placement Initiative, offering board diversification as a core service to clients, and took steps to support STEM education among girls. Ultimately LSA created a 501(c)(3), the Alliance for Advancement & Diversity, dedicated to promoting women in STEM.

Spreading the word of LSA’s activities required care, since LSA couldn’t be seen as tooting its own horn after its conference misbehavior. Targeting media that had negatively reported on the LSA party, TASC generated positive coverage in mainstream and trade media.

In the end, TASC produced genuine change that will have lasting impact affecting the entire life sciences industry. 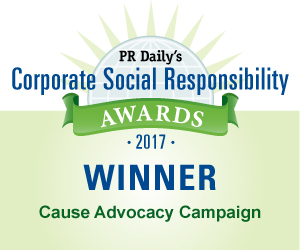