Medela, a manufacturer of breast pumps and other breastfeeding products, launched an app that does everything one would expect a breastfeeding app to do: It provides on-demand information and resources while allowing new mothers to track their breastfeeding activities, from pumping and feeding to monitoring goals, and it does all these things elegantly. For this reason, Medela is the winner in the “Best App” category of PR Daily’s 2016 Digital and Social Media Awards.

With the ever-expanding universe of apps out there, how could Medela create the awareness required to drive downloads? The answer: a comprehensive and strategically grounded marketing campaign.

Targeted reporters who agreed to an embargo received materials to help them prepare reports (along with invitations to interview spokespersons). A multimedia press release was made available which included app screenshots and an introductory video; it ultimately gained 5,000 views, supplemented by the concurrent distribution of an infographic and a listicle covering the “Top 8 Breastfeeding Tips for New Moms.”

The listicle alone was viewed more than 58 million times. The outreach resulted in nearly 100,000 app downloads from the iTunes store and another 25,000 from the Google Play store. The downloads were inspired, in part, by extensive media coverage resulting from the company’s proactive outreach. Outlets reporting on the app covered the gamut from Fast Company magazine to a wide range of parenting publications.

For driving interest in an app that addresses an important issue, congratulations to Medela for its success. 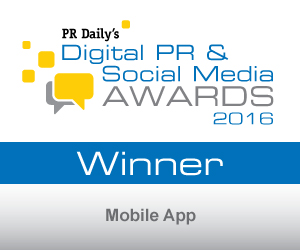