Just creating a microsite doesn’t guarantee people will visit it—or even know it exists. As part of an effort to reduce the size of its report on sustainability, PepsiCo crafted a microsite called HowWillWe.com, dedicated entirely to stories, videos, imagery, and other assets documenting the company’s sustainability efforts. To get the word out, PepsiCo executed a multi-faceted public relations campaign with skill and precision, earning HowWillWe.com the Grand Prize for Best Digital PR Campaign in PR Daily’s 2016 Digital PR and Social Media Award.

The effort included owned media, with PepsiCo’s social channels delivering repurposed content from the site in the form of GIFs, Vines, and other tools. It also used earned media, with an op-ed appearing in a key sustainability publication, and paid media, with activities on Mashable and RYOT.org. In addition, paid advertising played a role, with banner and native ads reaching the readers of hundreds of news outlets.  And at South by Southwest, PepsiCo held an Eco opening party for sustainability thought leaders, generating even more interest.

The result was 1.6 million high-value, intended engagements, such as important sustainability audiences visiting the site. In fact, the numbers PepsiCo achieved outpaced its goals in every one of the categories (earned, owned, paid, advertising and events). 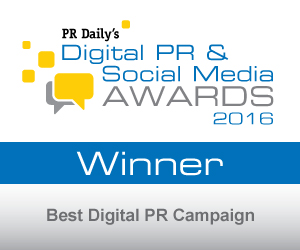