Too many corporate videos are just arrays of B-roll showing employees doing their jobs as a narrator extols the organization’s virtues. Not for Ferrovial, a multinational infrastructure organization engaged in work on airports, roads, and other construction and service projects, headquartered in Spain. Its video “Hands” has won first place in the “Company Overview Video” category of PR Daily’s 2016 Video Awards.

To shine a light on the diverse work performed by its 69,000 employees in 25 countries, a video crew shot footage in Spanish and Portuguese locations that focused on employees’ hands as they performed their different jobs. From manipulating ethernet cables to pointing out specs on a blueprint, from tightening pipe fittings to handling a joystick, the quick cuts—supported by dramatic music and large, inspiring text—convey not just the kind of work Ferrovial employees do but the skill and precision with which they do it.

Produced in both Spanish and English (which required only a change to the text, since no words are spoken), the video has achieved a significant number of views via social media even though it was intended primarily for employees to see at the organization’s annual conference, its Christmas party and its general meeting. 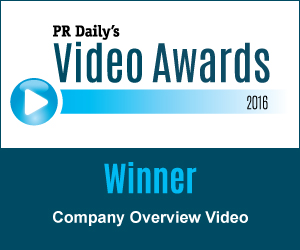