Denton County Transportation Authority sought to increase ridership while raising awareness of the fact that the DCTA’s trains and buses accommodate bicycles. The video it produced, “How to Load Your Bike,” made that point clearly—and in doing so won first place in the “How-To or Demonstration Video” category of PR Daily’s 2016 Video Awards.

The main key messages DCTA wanted to ensure were . . .

• DCTA makes it easy to bike and ride to your destination
• Bikes are allowed on DCTA buses and its A-train
• DCTA provides safe, customer-focused mobility solutions

The video is a simple how-to, very watchable at about three minutes. It clearly shows how to safely put a bike on the rack mounted on the front of the bus, then how to take it off again (as well as how to bring them onto one of DCTA’s trains).

But simply sharing the video on YouTube and Facebook wouldn’t have gotten the word out. So in addition to these channels, DCTA promoted the video heavily during National Bike Month, sharing it with community partners. The video also ran during community events and activities.

The combination of venues for the video produced respectable numbers of views on YouTube, Facebook and Twitter. DCTA is also repurposing the video into a shorter public service announcement airing on TV, thus getting even more bang from the modest bucks it invested in the production. 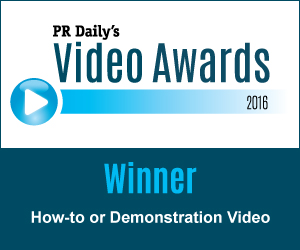