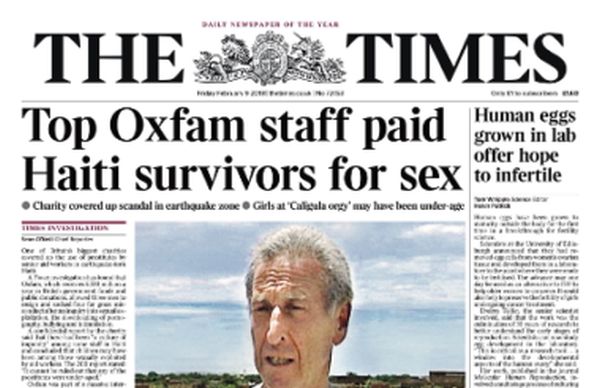 Some crises seemed poised to break all the rules on managing reputational risk.

They rarely arise in the charitable sector, however.

The Oxfam maelstrom reminds us that no organization is immune from an existential crisis. What went wrong for one of the UK’s biggest charities, and what could its communicators have done to head off or mitigate the damage from the unfolding sex scandal?

The first strategic decision is to recognize that you are facing a potential crisis.

Strike one for Oxfam.

At a recent House of Commons committee meeting, Oxfam CEO Mark Goldring admitted to not even reading the report into the wrongdoing in Haiti that precipitated the current crisis.

He’s also gone on the offensive, stating: “Anything we say is being manipulated. We’ve been savaged.” With more than an echo of BP’s Tony Hayward’s infamous “I want my life back” gaffe, Goldring told The Guardian he had not slept for six nights, saying: “The last six days have been the most intense and challenging of my life.”

Yet again portraying Oxfam as the victim, he said: “The intensity and the ferocity of the attack makes you wonder, what did we do? We murdered babies in their cots?”

Clearly, Oxfam was unprepared to respond to widespread accusations of wrongdoing. Lack of crisis preparation has forced the charity to scramble for a last-minute response.

Real crises have victims, and how you treat them will determine how your organization will be viewed and how well you will survive the storm.

For Oxfam, the victims were the young women provided as prostitutes to its employees in Haiti and women allegedly coerced to trade sex for aid. Their best interests and the need to protect them did not seem to play any part in the decisions that Oxfam leaders took when the scandal was first brought to their attention—or since.

In 2011, when troubling reports surfaced, Oxfam took a short-term fix of weeding out those concerned. Some staffers were simply moved to different positions, and others switched jobs—which presumably presented similar opportunities to exploit people in need.

Sweeping problems under the rug and hoping no one notices is never a wise move. It is a classic mistake—organizations see themselves as the victim, and they act to protect their own. Perhaps Oxfam leaders felt the charity was the victim of rogue staffers threatening its good name, when the real victims were exploited young women struggling to survive in the wake of a natural disaster.

The second big error Oxfam made was failing to report criminal activity to the relevant authorities. Prostitution is illegal in Haiti, so Haitian police should have been informed.

Given the suspicion surrounding the ages of the females involved, Oxfam should have also reported the situation to law enforcement authorities in the U.K., where it is headquartered. That would have allowed Oxfam to deflect criticism onto the alleged perpetrators of the crimes and away from the charity’s own governance arrangements.

Any company can suffer major PR damage from the actions of one or two bad apples, but when the organization fails to ensure employees are dealt with appropriately, problems inevitably spread. In the case of Oxfam, the crisis has spiraled to the point that the organization’s values, culture and structure are being called into question.

Once an organization sets its strategic course in a crisis, there are other tactical decisions to be made. These largely surround the tone of the communications. Also, it’s important to select a spokesperson and the channels you’ll use to reach key stakeholders. Here again, Oxfam and its chief spokesperson made errors.

The Times broke the story on Twitter on Feb. 8, and then in print the next day. Oxfam’s CEO was on the BBC Radio Four program on Feb. 10. However, Goldring once again put Oxfam at the center of the issue, rather than focusing on empathy for the victims. It was reactive and uninspiring.

Crisis communicators talk about the five C’s of crisis messaging: concern, clarity, control, confidence and competence. Basically, stakeholders want to hear sympathy for the victims and a credible plan to put right what has gone wrong.

So far, we have not heard much of this from Oxfam.

Chris Tucker is course leader for the PR Academy CIPR Specialist Diploma: Crisis Communication and the CIPR Professional PR Diploma. A version of this post first appeared on PR Place.