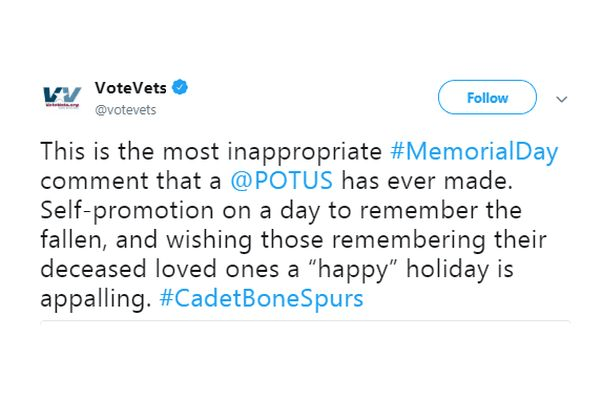 When a brand manager posts a leaden tweet, it’s a PR blunder.

When the commander in chief tweets something “tone deaf”—especially on Memorial Day—there’s national outrage.

On Monday, President Donald Trump tweeted a video in which he talked about a 7-year-old boy whose father had died during military training exercises:

The video’s story—which Trump later shared in his address at Arlington National Cemetery, concluded with the following message: “As Americans, we come together to remember our great heroes on this Memorial Day.”

Happy Memorial Day! Those who died for our great country would be very happy and proud at how well our country is doing today. Best economy in decades, lowest unemployment numbers for Blacks and Hispanics EVER (& women in 18years), rebuilding our Military and so much more. Nice!

The comments by Mr Trump on a day that has been marked since 1868 to honour those who died while serving in the country’s armed forces, triggered immediate criticism. Many commentators said it was inappropriate for the president to try and score political points on such a day.

Former Army Gen Martin Dempsey, who served as Chairman of the Joint Chiefs of Staff during the administrations of Barack Obama, said on Twitter: “This day, of all days of the year, should not be about any one of us.”

John Kirby, a State Department spokesman in the Obama administration, called Mr Trump”s tweet “one of the most inappropriate, ignorant and tone-deaf things our Commander-in-Chief could have said on a day like today”.

Mr. President: My father was MIA in Vietnam for 30 years. I will visit him at Arlington today. There is nothing “happy” about #MemorialDay. pic.twitter.com/QHShDLxJGK

This is the most inappropriate #MemorialDay comment that a @POTUS has ever made. Self-promotion on a day to remember the fallen, and wishing those remembering their deceased loved ones a “happy” holiday is appalling. #CadetBoneSpurs pic.twitter.com/kRse4dnwiu

CNN published an article titled, ” Donald Trump just put the ‘Me’ in his Memorial Day tweet .”

Hey @realDonaldTrump , I fixed this for you. #MemorialDay pic.twitter.com/e2SwjQ55an

[ FREE WEBINAR ON DEMAND: How Media Monitoring Can Calm a Crisis]

Other members of Trump’s family struck a more somber tone:

Memorial Day messages from first lady Melania Trump and Ivanka Trump, the president’s daughter, struck to a theme of remembrance and thanks.

“As we remember our fallen servicemen and women, our hearts are filled with gratitude for their sacrifice and awe of their courage,” Ivanka Trump tweeted.

And Melania Trump thanked service members and their families for helping safeguard the country. “We honor the many Americans who laid down their lives for our great country. As one nation under God, we come together to remember that freedom isn’t free,” she tweeted.

Just got this email about a Trump Store Memorial Day sale.

It says to get your discount, “USE CODE: REMEMBER”

It’s no secret that big brands usually pounce on the opportunity to offer their customers better-than-normal savings with big deal days around holidays like Memorial Day, but a Memorial Day sale that employs “REMEMBER” as the discount code coming from the sitting U.S. President, who is also Commander in Chief of the U.S. Armed Forces, did not sit well with many of President Trump’s constituents.

Though most brand managers won’t venture into the political arena while drafting online marketing messages, the situation reminds brand managers to double-check that your posts are not self-serving during inappropriate times, such as Memorial Day or Veterans Day or in the wake of a national tragedy.

Always make sure you strike the correct tone for the occasion.