Measurement has never been more important for PR practitioners.

Many communicators report that a top concern is proving value to top decision-makers—thereby earning bigger budgets. A recent study revealed that many executives either don’t know what PR is or don’t value its contribution to their bottom line.

Yet PR pros have been debating the finer points of how to measure their campaigns for over a decade, the foundational text for many being the Barcelona Principles. These guiding tenets were an attempt by some to change the conversation around measuring communications from looking at how much effort was expended to what an organization reaped from all that work.

PR pros have been relying on the Barcelona Principles for almost 10 years. How has the industry been shaped by the framework introduced in 2010? Has it been successful?

David Rockland, who spearheaded the original campaign to establish the Barcelona Principles, says the project started to get PR pros to move away from “silly metrics.”

“AVE is a silly metric,” he emphasizes, pointing out that measuring PR’s impact by looking at advertising costs is just a bad analogy. The idea, he says, was to stop measuring inputs and start looking at outputs.

“It’s not whether you wrote a brilliant press release,” says Rockland, partner and CEO at Rockland Dutton Research & Consulting. “It’s: How many saw your articles? Did it affect sales or donations to your nonprofit?”

[RELATED: Ragan Consulting Group can help you find, tell and share your organization's compelling stories in any format]

A roadmap for success

The Barcelona Principles are a framework, not a formula. At their heart, they are intended to put to bed the question of whether PR efforts can be measured. In 2010, practitioners from mainly PR agencies came together to create the first framework with seven guiding principles.

In 2015, the principles were revisited with new organizations such as governments and nonprofits, as well as for-profit corporations, weighing in. The foundational idea stayed the same: PR pros should measure outcomes, not the effort expended to achieve them.

Here is a side-by-side comparison: 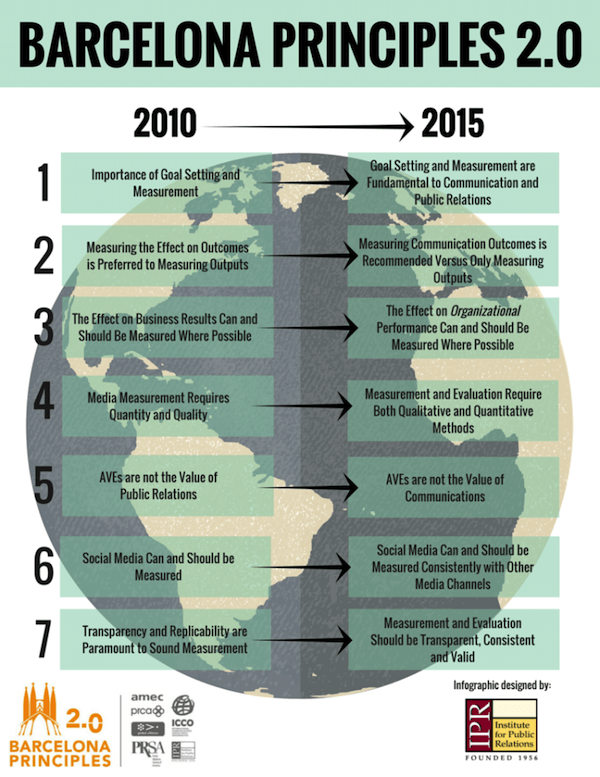 Rockland says the principles should be a “work in progress.”

“The principles were created to get people used to being measured on results, not on what they did,” he says.

Have they been successful in changing how PR pros operate? Rockland thinks so, though he concedes that as the Barcelona Principles’ primary author, he is biased.

“There aren’t any other principles,” he says, “No Chicago Principles, no Detroit Principles … Nothing else has come along.” He looks to big organizations like the World Bank, the U.K. government and the airline industry, which have all adopted the principles, and he finds that the industry has changed for the better.

“It’s not about how you create stuff,” he says. “What matters is the change [you create].”

Steps in the right direction

PR pros agree that the principles have been useful.

Shannon Tucker, senior director at SSPR says: “SSPR believes in the Barcelona Principles, but it’s time for them to be adapted. Goal setting and measurement are fundamental, yes—in 2019, I hope we are to a point where that is so obvious that it doesn’t need to be explicitly stated.”

Julie Wright, president of (W)right On Communications, finds value in the principles nearly 10 years later. “Two of our team members, myself included, have completed the AMEC International Certificate in Measurement and Evaluation course,” she says.

“Like all communication best practices,” she adds, “adhering to the Barcelona Principles is always a priority, but our agency has to get creative sometimes and find cost-effective ways to measure outcomes and impacts given budgets, timelines or other client-imposed limits.”

“The Barcelona Principles are a good rule of thumb, especially when it comes to sticking the sword in the AVE dragon that refuses to die, emphasizing outcomes over outputs, and how anything can be measured if you design a structure that allows it to be,” says Ritchie. “But like any words to live by, there are extreme interpretations which become counterproductive. Some of those interpretations include the prioritization of measurement above all else and rigid goal-setting that emphasizes KPIs.

“Measurement is only important to the point where it allows great work to happen or continue.”

However, the principles haven’t gone far enough for others. After the 2015 update, Gini Dietrich of Spin Sucks had this to say:

As far as I can tell, the only things that have changed in each of the Barcelona Principles are words. We now define the “metrics” this way: Public relations are communications, AVEs are not real metrics, social media can be measured, and we should be transparent. Those are not metrics. That is not how you measure the effectiveness of a public relations program.

If we can’t get it straight for the industry, how do we expect to be taken seriously by the outside world?

Is it time to update the principles again?

Tucker says it’s time to get more specific about what PR pros should measure. “Impressions need to have their own category on the Barcelona Principles, similar to how AVE is listed,” she says. “In 2019, impressions are a joke, and PR should not be using them.

“Some replacements for metrics can include number of leads or conversions, Google Analytics (spikes in web traffic when your news ran; if the article contains a backlink, find out how many people actually clicked to your website from the article and see how much time they spent there), and message analysis: How many of your key messages were included in the articles?”

Rockland agrees that it is time to take another look at the principles. “I think we should think through the role of [artificial intelligence] and measurement,” he says. “Also, channel change: Are the channels still relevant? Do we adequately gauge how effective an influencer is?”

However, for Rockland, the overall message remains the same. “The ideas won’t change,” he says. He contends that transparency will still be a key concern, but the problems threatening transparency might change.  “Is AI automatically transparent?” he asks.

Rockland also urges getting more precise about key metrics. He identifies the three buckets the principles identify: outputs, outcomes and organizational business results, but he concedes the principles could be more specific.

“When talking about outputs, I often mention to clients things like voice, reach and engagement,” he says. “How loud were we? Did they engage?” He agrees that a new draft of the principles might nail down certain metrics in more exact terms.

One big change Rockland would advocate: Get some fresh, young thinking in the room. “Too many of the people focused on measurement are late in their careers,” he says. “If we are talking about AI, I want to hear from people in their 20s who are making this stuff…people who are two or three or four years into a career and who are fluent in these technologies.”

While they wait for updated principles, PR pros will still be well-served telling great stories for their clients.

“Clients will choose a big, bold, brave concept that gets them excited over a data- and metrics-laden approach almost every time,” says Ritchie. “You’ve got to be able to make the people at the top fall in love with an idea. If you can do that, they’ll be personally committed to funding the work and blocking for you while you take it to their target audience. Love conquers all, even in the C-Suite.”

What do you think? What changes would you make as PR pros look to the next decade?

Image via The Institute for Public Relations.