The current moment is one of generational, groundbreaking change—and communicators should lead the movement.

That’s the thesis of a new Arthur W. Page Society report advocating for the role of communications and communications leaders in business enterprise. The report, an exhaustive review of over 200 CCOs and their organizations from around the world, lays out a case for the CCO to become the “pacesetter” for change in the modern workplace.

“CEOs across industries and regions are driving the greatest wave of transformation in generations,” the report states. “It is striking that not only are so many companies changing simultaneously, but many are changing into the same kind of company. … We also see ample evidence that CCOs are playing a key role helping CEOs transform their companies by defining, reinforcing or reviving corporate character – the unique, differentiating identity of the enterprise. At the same time, new digital capabilities are helping CCOs to engage stakeholders, authentically and effectively.”

A pathway to leadership

How can the communicator become the organizational leader who ensures changes are sustained and who guides top executives into new and profitable business models?

The report offers a path to becoming a “pacesetter,” an advanced practitioner who can lead an organization into the future, by delineating three stages of advancement in the four core areas the report identifies as part of the communications role: corporate culture, corporate brand, corporate societal value and communication technology.

Each level represents a deeper understanding and facility with the latest tools and tactics, starting with the “professional” level and moving on to the “pathfinder” and “pacesetter” levels.

Jon Iwata, former marketing and communications leader at IBM and now an executive fellow at Yale School of Management, says the biggest area of change for most communicators is technology.

The report labels this area “CommTech,” which Iwata says derives from the portmanteau for marketing technology “MarTech.”

According to the report, many communications leaders are comfortable producing and distributing content and engaging stakeholders on social media but have significant work to do before progressing to more technologically advanced tactics with targeting and the use of consumer data.

He says most communicators aren’t thinking about consumers interacting with their content on a journey toward a desired outcome, as marketers have done with the buyer’s journey. Content management software and automation platforms are the future, and Iwata argues that communicators need to learn how to use them. 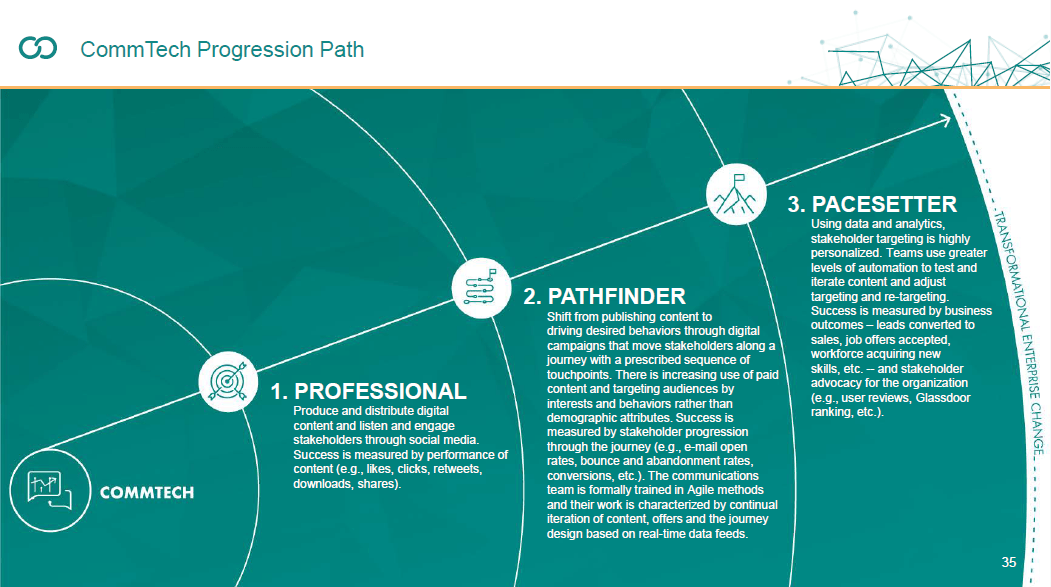 When pressed about the potential for communications budgets to explode with new platforms and technology needs, Iwata pushes back.

“Plenty of the tools communicators would use, like Google Analytics or the built-in analytics with Facebook and other social media platforms, are free to use,” he says. “Cost isn’t as big a concern as you might think.”

The communicators that Page interviewed were concerned about two specific challenges posed by technological changes and advances hitting the communications industry: data use and deepfakes.

Iwata says many communicators are concerned about how to ethically collect and use consumer data to target audiences and create fulfilling content journeys. However, he argues that there are ways to get the information you need without being invasive, with opt-ins and transparency.

The technological change that keeps communicators up at night is the ability for bad actors  online to create a false narrative about a person or a brand. Deepfakes, a new video technology that enables creators to make convincing fake videos featuring celebrities and important spokespeople, has many communicators worried about how they can protect their brands.

That’s because 66% of the communicators surveyed said they own protecting the brand’s reputation and brand position in the marketplace, a responsibility once held exclusively by the marketing side. Iwata argues that this change is happening because of the need for CEOs to position their brand with stakeholders beyond just the customer base. 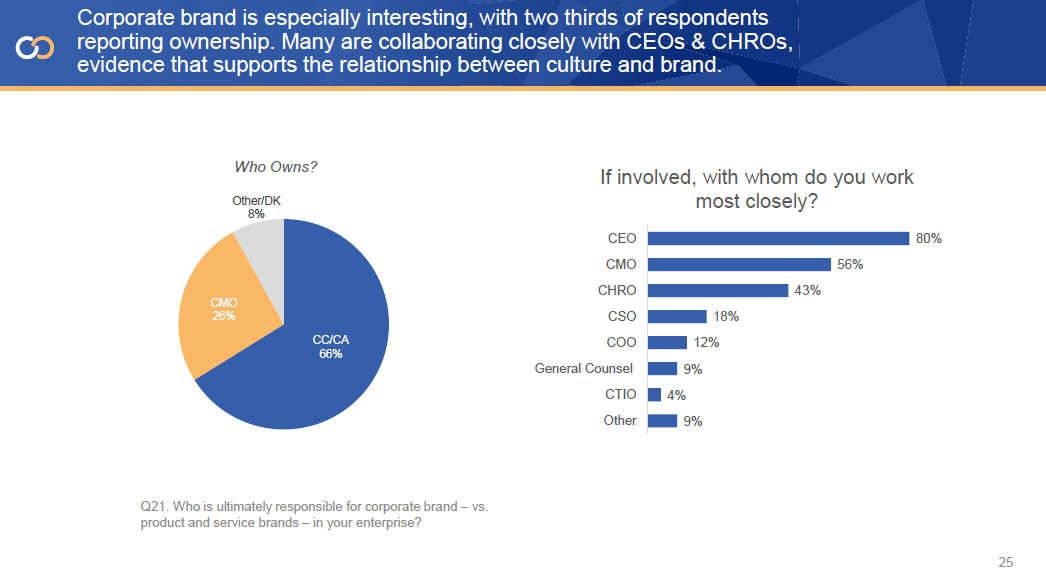 “When you are recruiting,” he says, “if your company can’t hire the developers and engineers it needs because those people all want to work for Google or Spotify, you need to change your branding.” Iwata says that communicators are perfectly placed for this task because of their inherent role in thinking about all stakeholders, from investors to employees.

What is special about this moment

This isn’t the first report of its kind that Page has put out, but the fourth in a series of reports that it hopes will inform and guide communicators as they advocate for their roles and the industry as whole.

This latest report comes at a singular time for business leaders. Many legacy brands are in the midst of disruption, and Iwata sees an unusual alignment in the agendas of CEOs worldwide.

“The argument of whether or not we have to change is over,” he says, pointing to the many organizations and industries that are already pushing for transformative change. “Instead the question is how are communicators impacted and how are they going to respond?”

For most, there’s plenty of room to grow. 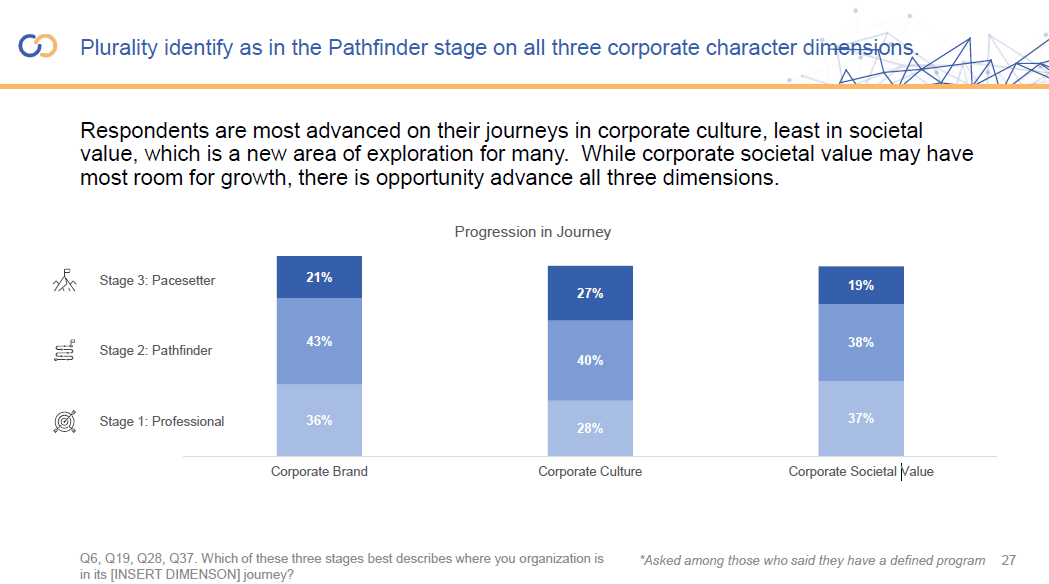