The majority of workers in the U.S. (61%) say they have experienced discrimination, either personally or as a witness.

So, many in the workplace are keenly aware of problems related to racial justice, diversity and inclusion in the U.S. However, when it comes to identifying problems in a workplace they belong to, workers are less definitive. According to research conducted by Clutch, more than half (56%) say that discrimination is not a problem at “my workplace.” 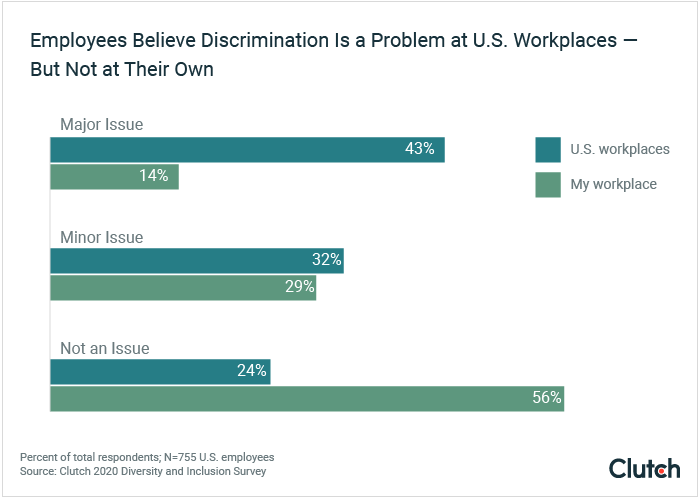 So what’s driving the discrepancy? Experts say that you might be overlooking problems within your organization.

In its report, Clutch wrote:

Jes Osrow, talent development expert and speaker on invisible disabilities at JOSROW Consulting, said people don’t think their workplace has a problem with racism and discrimination because of “blissful ignorance.”

“Often racism isn’t as blatant as what we’re seeing in the media now in the workplace,” Osrow said. “It is more an ongoing, system struggle for equity and equality.”

Perhaps it’s time for your organization to have an important and frank discussion about equity and inclusion?

There’s no denying that the business world is facing a moment of disruption and change. After the COVID-19 crisis and the murder of George Floyd in Minneapolis, many Americans have expressed support for the Black Lives Matter movement and a renewed conversation about discrimination and racism in American society.

Almost two-thirds (62%) of workers say they are supportive of nonviolent protests as a result of the death of George Floyd. 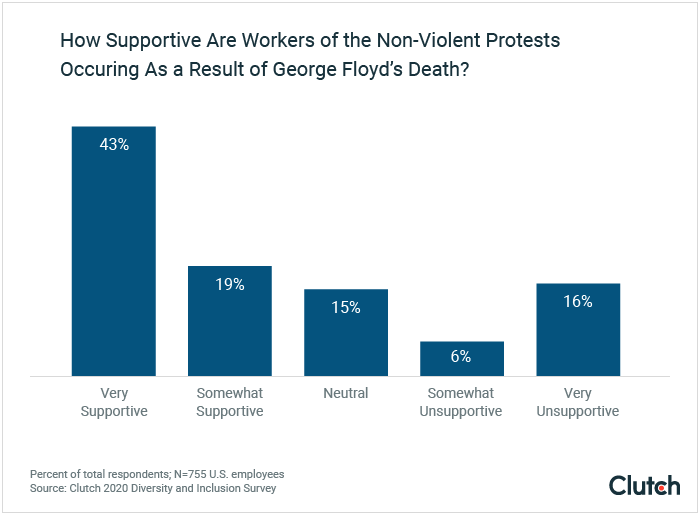 However, many businesses have been reticent to take strong action, despite many experts warning that silence and inaction isn’t a safe option.

Over half (51%) of employees say that their company has done nothing to address the death of George Floyd and resulting protests. For those that have taken action, a public statement is the most common action, perhaps because it costs the least out of the potential actions available.

Other actions have been an open discussion with leadership (19%), donations to causes (10%), promises to hire diverse workers (7%) and making it easier to take time off (6%).

The lack of action by businesses paints a stark contrast with what employees say they want. More than half (55%) say their company should address the death of George Floyd and the resulting protests.

The survey also suggests that workers at bigger companies are more likely to believe racism is a problem at their workplace. 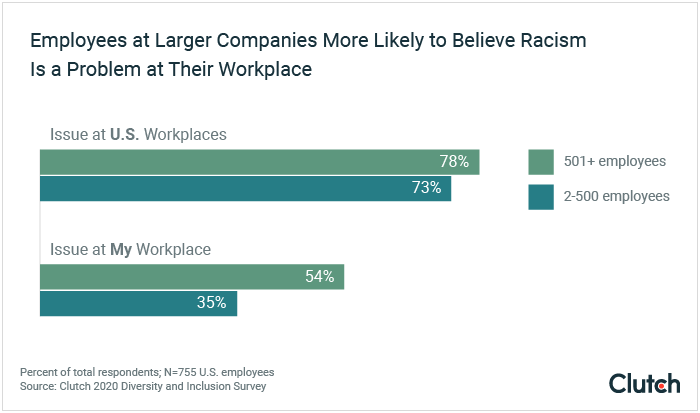 The gap here might be explained by the different hiring models adopted by big and small organizations.

Smaller companies tend to take an “all-hands-on-deck” approach to their processes and involve more people in key decisions. This makes it easier for all employees to take on new processes and advance. Larger companies, on the other hand, make it more difficult for employees to advance. There are just four black CEOs on the 2020 Fortune 500 list, and the highest-ranked one is Marvin Ellison, of Lowe’s, at 44.

However, large businesses are far more likely to have issued a statement on George Floyd and the Black Lives Matter movement: 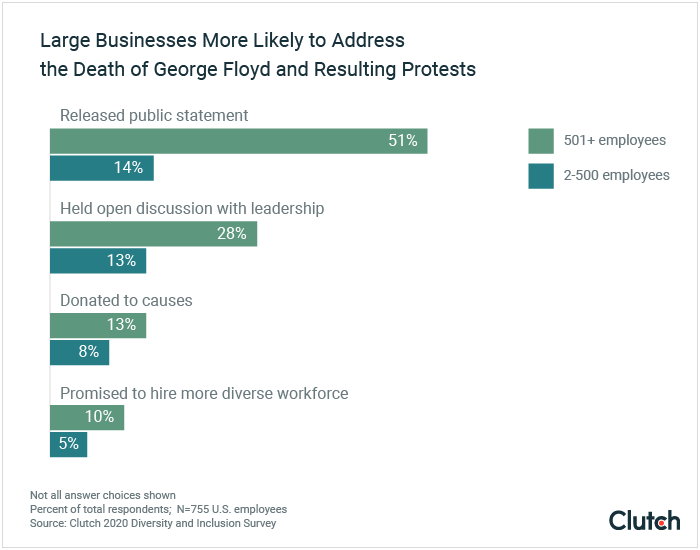 Are you satisfied with how your organization has responded to the death of George Floyd and the protests around the world? Share your thoughts in the comments, please.