Chances are you’ve heard at least one of those names. They are the voices of Gen Z.

They might not be polished, but they’re real, they’re raw, and they’re resonating with their generation and many others. Gen Z is here to hold us accountable. They’re calling for action, and it’s time to respond.

With the oldest of this cohort entering the workforce, flexing their purchasing power and shaping strong opinions of the world around them, it’s time to take Generation Z seriously. This generation feels empowered to change the world for the better.

Given the undeniable power of this upcoming generation, it’s important that organizations and executives understand what Gen Z cares about, what motivates them and how they expect purpose-driven companies to lead.

The 2019 Porter Novelli/Cone Gen Z Purpose Study finds that recent events have heightened Gen Z’s propensity to care and to lead. Eighty-six percent say events like the Stoneman Douglas High School shooting have made them care more about issues affecting their generation. This generation remains concerned about the health of our planet (87%, two ticks down from 89% in 2017), and 88% care deeply about social and environmental issues.

Even up against such acute and seemingly insurmountable global problems, Generation Z is feeling not only inspired, but empowered. Eighty-eight percent feel their generation has the power to transform the world for the better, and 83% believe they personally can make a difference on issues important to them.

They’re also proud of the emerging leaders of their generation; 87% are encouraged when they see peers such as Emma González or Greta Thunberg take a stand on issues. They are undaunted, with more than three-quarters (76%) saying they believe in five years’ time we will have made progress on important issues.

Perhaps unlike older generations, Gen Z is ready to flip the script on the national dialogue and start fresh. Nine in 10 are tired of how negative and divided our country is on important issues, and the great majority (85%) would rather focus on the positive progress made rather than the negative. They feel Americans can and should do more as a united force. 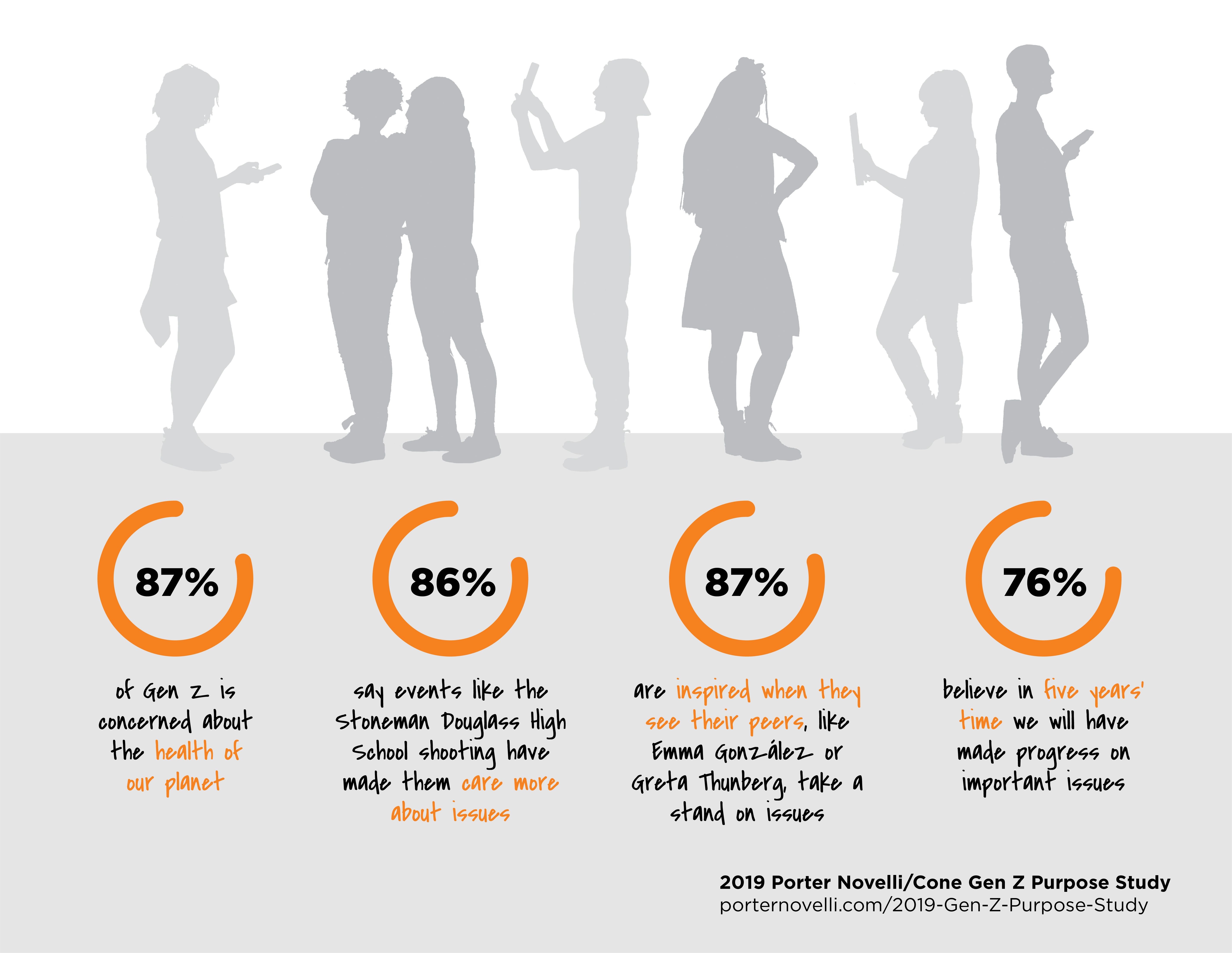 For all the energy and motivation from this young cohort, they know they can’t do it alone,  and they’re looking for purpose-driven companies to lead, with 90% saying companies should act on these issues.

Yet with action comes accountability. More than nine in 10 (93%) say that if a company makes a commitment, it should have the appropriate programs and policies to support that commitment. They’re not taking companies on their word alone. Three-quarters (75%) will do research to see whether a company is walking the talk when it takes a stand on an issue.

So how can companies not only energize but engage this budding group of leaders? Here are a few “need to know” tenets that purpose-driven companies must keep in mind:

1. Flip the narrative and stay positive. Gen Z is sick of the doom-and-gloom dialogue. They want companies to keep it positive and show them how participating in purpose-driven efforts can help them move the needle on issues they care deeply about. They’re primed and ready to join your movement.

2. Speak their language. Although the environment took the top spot on the list of most-urgent issues for companies to support, Gen Z wants companies to address most of the issues filling up their social media feeds. Companies must determine which topics align with their purpose and which they can authentically get behind.

3. Empower and energize for action. Gen Z is pragmatic but driven—and they’re willing to take a host of actions to make a difference. Keep them motivated by showing how their efforts are laddering up to collective impact; they want to know they are making real and tangible change.

4. Reach them where they are—online. Twitter. Snapchat. Not to mention TikTok, Tiltify and VSCO. Gen Z has become keenly aware of the power of their smartphones to amplify messages into movements, and they’re putting this tool to good use. Show up where they are, but understand that you have about eight seconds or less to grab their attention. Use those seconds wisely to create urgency and show them the impact they can have—both on- and offline.

Many practitioners and thought leaders have seen the powerful voice Generation Z is leveraging both on- and offline, but with all the noise comes one question: Will they follow through with true impact? And that is the crux of it.

While Gen Z has the energy, passion and willpower to tackle issues they see as so urgent to our society, business has the scale, acumen and influence. It’s time to join forces with this empowered generation of future business and world leaders and give them the tools and avenues to make an impact.