The challenge: How to translate an obscure symbol on the periodic table into something that conveys leadership in innovation? Raytheon is known for many things—state-of-the-art electronics, mission systems integration, cyber security, and much more—but few people outside the industry probably knew that Raytheon is a pioneer in the realm of gallium nitride (GaN) technology. When Carolyn Baudry and her team were assigned to highlight the work of Raytheon’s Advanced Technology Programs department, they realized that 2014 would mark the 15th anniversary of Raytheon’s leadership in GaN innovation. Their strategy from that point on was focused on building a campaign around the anniversary and supporting it with milestone announcements that highlighted continued progress and commitment to innovation. The “Fifteen Years of Innovation with Gallium Nitride” story on the organization’s home page received more than 10,670 visits and was the second most popular story at the time in the Raytheon newsroom. Congratulations to the team of Carolyn Baudry, Donna Ayer, Bailey Sargent, Keri Connors and Garrett Nuttall. 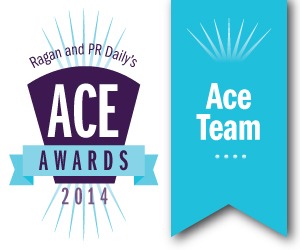