The Pedigree Feeding Project’s cause seems like a pretty easy sell, at least to dog lovers.

The basic idea behind the project is to provide shelters with complimentary, high-quality dog food. Not only does that mean shelter dogs are better nourished than they may otherwise be, it also frees up shelter budgets to funnel more funds into adoption programs.

Rather than simply letting the program speak for itself, though, Pedigree and its agency partner, Weber Shandwick, launched the “Choose the Next Communities” initiative to draw people even further into its cause. The team used every tool it could—live events, media outreach, social media, retailer engagement, and community outreach—to boost involvement.

Pedigree asked people to nominate their hometowns to be one of the next to benefit from the program. That included a Twitter party that used the hashtag #FeedingProject, encouraging Facebook users to share their favorite dog memories, and a meet-and-greet event in New York City with celebrity spokesperson Miranda Lambert.

It all paid off—15,000 people nominated their hometowns, 4,000 of them in the first 24 hours of the initiative. The media push got 175.6 million earned impressions and nearly 4,000 media placements. The social media impressions topped 25 million, and 36 million people voted on the five finalist cities.

Most importantly, nearly 30,000 dogs have been fed through the program (with 2.4 million pounds of food) and 15,000 have been adopted. 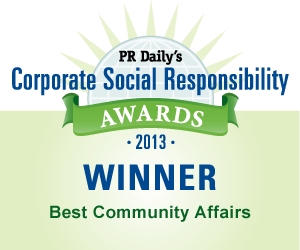