Lacking appropriate facilities to participate in recycling efforts has been a key reason only 20 percent of all paper consumed in Costa Rica is recycled. Many Costa Ricans have expressed concerns about environmental issues, but most never personally recycled (or did so only once annually).

Kimberly-Clark—which uses recycled fiber in its paper products—and its Costa Rican communications partner, Próxima Comunicación, set out to build partnerships between among companies, public organizations, community groups, and social organizations to reduce pollution and improve environmental outcomes. Targeting Costa Ricans age 25 and over, the campaign reached out to TV viewers to educate them about AmbientaDOS (so named to reinforce the idea of dropping off recyclables twice each month), Kimberly-Clark’s initiative to introduce sustainable collection points for recyclable goods.

As a result, nearly 200 tons of recycled materials are collected each month—not just paper, but other recyclable goods, as well. In addition, the economy has benefited as new businesses have been established to support recycling, while some 400 individuals are employed directly by the collection centers. The initiative is ambitious, featuring a broad range of communications and partnerships, and has been effective in driving cultural change with 68 communication campaigns that have helped Costa Ricans become accustomed to bringing their recyclables to any of 39 collection centers in seven provinces.

For its tangible impact on the environment in a country in which it operates, we are honored to recognize the AmbientaDOS campaign’s Próxima team and its partners at Kimberly-Clark, as well as Televisora de Costa Rica, with the prize for Best Green/Environmental Stewardship in PR Daily’s 2014 Corporate Social Responsibility Awards. 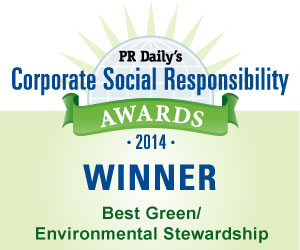