The goal of Bayer Crop Science’s “Feed a Bee” social media campaign was simple: Educate the public about the importance of bee health and how people can be part of the solution to the troubling decline in the bee population. The video Bayer created as part of its strategy has won it the organization first place in the “Video or Visuals” category of PR Daily’s 2017 Corporate Social Responsibility Awards.

The campaign aimed to build grassroots support for helping maintain a healthy population of bees. Its goal was to plant 85 million flowers on which bees could feed. People could visit a Tumblr site to get a packet of seeds or simply tweet the bee emoji and the hashtag #FeedABee, in return for which Bayer planted 200 seeds.

Bayer’s partners in the campaign—BBDO, Mastermind and Porter Novelli—had launched the campaign the year before and knew they had to broaden its reach. To do so, the team opted to produce a video based on a mural painted by a well-known Atlanta artist as part of the campaign. The animated video included a song, and the combination of visuals and music became the conduit for the #FeedABee message. 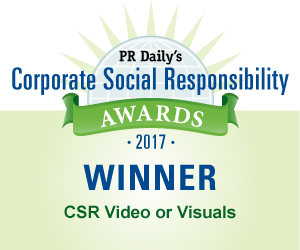