Recognizing that Korea ranks low on several indicators of gender equity, notably bringing women back to work after a career break to have children or raise families, SAP decided to make the country its first Asia Pacific Japan participant in its program to ease the path for women who want to rejoin the workforce. Now SAP’s and Weber Shandwick’s “Back-to-Work” campaign has won first place in the “Diversity and Inclusion Initiative” category of PR Daily’s 2017 Corporate Social Responsibility Awards.

The program offers women the opportunity to register for six-month work projects in a number of countries, with more being added all the time. Three months before a launch event, the SAP team developed relevant and compelling messaging that positioned the initiative as an essential program to prepare women professionals to return to the workforce.

The launch event offered real-world perspectives from female professionals who had successfully re-entered the workforce. The event attracted considerable coverage, and was viewed via a Facebook livestream both during the event and afterwards. The organization also facilitated conversation via a messaging app. SAP itself has hired more than 10 women through the initiative. 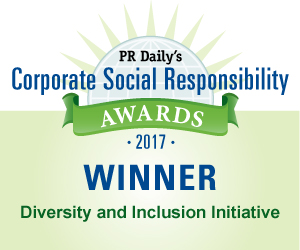