On India’s roads, a fatality happens every 3.6 minutes. Two-wheeler riders account for about 25 percent of the accidents, and 7 percent of the victims are under 14 years old. A lot of those lives would be saved if only riders wore helmets, yet only 12 percent of two-wheeler riders are committed to always wearing a helmet. These devastating statistics catalyzed ICICI Lombard, India’s leading private general insurance provider, to launch a campaign to increase helmet use. Its efforts have earned it first place in the “Public Health or Safety Initiative” category of PR Daily’s 2017 Corporate Social Responsibility Awards.

The campaign focused on turning children into influencers. Workshops presented in partnership with four NGOs reached 300 schools and spotlighted the particular risk to children; each child attending was given a helmet after ascertaining their parents were licensed to drive. Some 24,000 helmets were distributed. The children, in turn, appealed to their parents who rode two-wheelers to start wearing helmets.

The metrics ICICI Lombard used to quantify the campaign’s effectiveness all point to one overwhelming outcome: dramatically changed behaviors among a significant number of two-wheeler riders. That undoubtedly will save lives.

Congratulations to ICICI Lombard for its work. 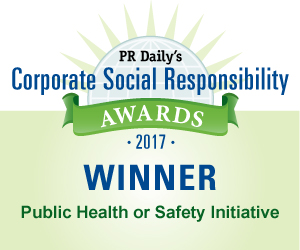