For 35 years, the DQ system has been supporting CMN Hospitals, a network of 170 member children’s hospitals collectively known as the Children’s Miracle Network Hospitals®. In 2018, for the 13th year in row, the soft-serve ice cream chain sought to drive consumers to its stores to buy its signature Blizzard® Treat, that would produce a donation from the local store, establish the connection between the DQ brand  and the hospital system and result in significant dollars donated to the charity. The tactics employed to achieve these goals have earned CMN Hospitals and the DQ system first place in the “CSR Event” category of PR Daily’s Corporate Social Responsibility Awards.

At the heart of the campaign was Teddy, an 11-year-old hydrocephalus patient at one of the CMN hospitals. Despite 39 surgeries, Teddy is charming and optimistic, leading to his designation as Chief Blizzard Officer of DQ for a day. His role was to live every kids dream of designing his own custom Blizzard Treat while also spreading the word about how the funds raised on “Miracle Treat Day” help children like him.

The team achieved this with a six-minute video shared over the DQ brand’s Miracle Treat Day website. Two one-minute teasers were distributed to franchisees for social and in-store viewing. Other assets were created for use in social media and media outreach. Collateral was also used within hospitals and by patient families, volunteers, network partners and influencers; a strong internal communication push was also executed.

Congratulations to the entire DQ system. 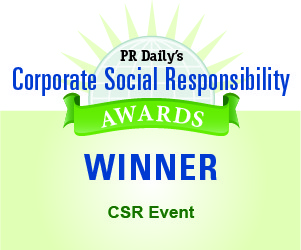