As the #MeToo movement exploded across the country, some organizations trembled in fear about what might be revealed. But Dixon Hughes Goodman LLP (DHG) opted for complete transparency, undertaking a communication campaign designed to join the anti-harassment conversation both internally and externally. The campaign has earned first place in the “Organizational Transparency” category of PR Daily’s Corporate Social Responsibility Awards.

In planning how the organization would approach discussing harassment, communicators identified two overarching challenges. First, they wanted to convey that DHG is a great place to work, a place where people were respected regardless of their age, gender, race or sexual orientation. Second, they wanted to cut through the high level of noise the #MeToo movement had created, ensuring the conversation continued well after the opening communication salvo.

To kick off the conversation, four of the company’s top leaders participated in a 30-minute livestream broadcast across the company. Titled, “#MeToo—Leadership Perspectives on the Current Movement and DHG’s Culture of Respect,” the stream addressed a variety of angles and facilitated in-office gatherings post LiveStream helped continue the dialogue and provided an avenue for our people to discuss and share their perspective.

Externally, a variety of channels were employed to promote DHG’s transparent approach to the issue, including a post on the CEO’s blog and the “Life at DHG” blog and a press release that conveyed how employees and partners joined the conversation. The release also shared insights from DHG leaders and a link to the CEO’s blog post.

A 22-page publication was distributed internally and externally, showcasing the company’s commitment to diversity. And the company’s intranet was brought to bear. Through the company’s participation in the annual Great Places to Work survey, it was clear employees felt respected in the organization. 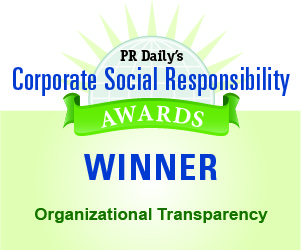