Trekkies paired with social media is a powerful thing. Esurance pulled out all the stops and tapped into the lexicon, fandom, and visual appeal of Star Trek for its campaign for the latest film franchise installment, “Star Trek: Into Darkness.” Esurance created a comprehensive Star Trek experience via a Star Trek tab on the Esurance Facebook page. The company employed the following tactics:

Provide exclusive content
Esurance, in partnership with Paramount, shared exclusive video content with fans on its Facebook page. This included behind-the-scenes videos and downloadable wallpaper. To add some whimsy to the social media mix, Esurance also allowed visitors to the Facebook Star Trek tab to turn themselves into a Vulcan (an alien race featured prominently in the Star Trek storyline) via the Vulcanizer app.

Host a sweepstakes
Talk about keeping your eyes on the prize. Esurance offered two lucky winners tickets to the premier of the movie and $2,500 to get there. To ensure that people were checking in with the app frequently, Esurance allowed contestants to enter once a day. This incentive coupled with the exclusive fan-oriented content ensured that fans would keep coming back for more.

Keep the momentum up
Phase 2 of Esurance’s social media strategy featured a “30,000 Ticket Giveaway” on Facebook. From April 23, 2013, through May 19, 2013, Esurance gave away 500 tickets per day. This involved simply liking the page and entering contact information for a chance to win. While this strategy doesn’t always breed continued loyalty to a brand page or campaign, the fact that it was paired with an updated Vulcanizer app, the previously mentioned video exclusives and outtakes, and free downloadable (and shareable) wallpaper, icons, and movie posters made it a strategic and worthwhile move.

The results
Esurance gained 41,321 new Facebook followers during the first phase of the campaign, which dramatically spiked to 83,839 during the second phase.

By the end of the campaign, the Star Trek Facebook tab had earned 627,592 visits. And that’s not all—Esurance wins PR Daily’s 2013 Social Media Award for Best Use of Facebook. Truly “stellar” work! 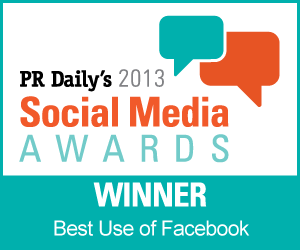