Given by Patrick D. Daniel, President and CEO, Enbridge Inc., on March 31, 2011 at the Empire Club in Toronto, Daniel argues for building a 5.5 billion-dollar pipeline across northern Canada to a new seaport on the northern coast of British Columbia. This new pipeline and port would open up the lucrative China market to the oil in the tar sands of Alberta.

This speech is certainly a deserving winner of the Ragan Employee Communications Award in 2001 for Best External Speech.

This is an excellent business speech. Restrained in its rhetoric, limited in its purpose, devoid of empty, ringing rhetoric, aimed at building public support for a practical business scheme, it seeks to change Canada from a “price taker” to a “price setter” in world oil and energy market by building a new pipeline from the tar sands in northern Alberta to the north British Columbia coast, putting Canadian oil and gas two days closer to China and the Pacific Rim than if it were delivered from ports to the south in the United States and Central America.

The speechwriter, Russ Peters, finds arresting phrases for the products and actors in this drama. The United States is never named as the controller of the price Canada gets for its oil and gas, but it’s clear that Canada is a “price-taker” because the U. S. makes the price.

The Northern Gateway pipeline will make Canada a “price setter” in the world energy market. Not only that, “. . .without it [the pipeline] we stay trapped in North America, . . .our nation’s most important export landlocked and discounted. . .”

The present setup makes Canada “complacent” and “a captive supplier.”

Daniel later compares the proposed pipeline to the much-advertised 4G smart phone networks in North America. Oil and gas, he argues, is at least as instrumental in making all of modern civilized life possible as 4G networks are in making Paris Hilton’s Twitter feed accessible to smart phone owners. The irony of these remarks is understated, apposite, and effective.

Daniel ends his speech by asking his audience, “our generation,” to “Connect Canada to the rest of the world.” He ends, “Mak[e] us integral partners to the most dynamic markets in the world for at least a generation to come.”

The length of this very business-like, single-theme speech was under 30 minutes. Daniel also deliberately forswears the use of humor in making his points, but the unobtrusive irony and half-hidden humor of the Paris Hilton analogy indicates that his sense of humor is less obvious, and certainly less forced, than that of many corporate speakers. 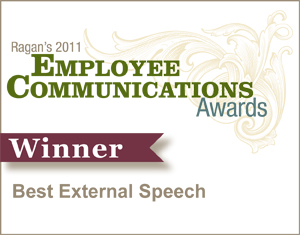