When Angie Tran-Bloom and Steven Bloom learned they were expecting triplets, their biggest concern was delivering three healthy babies. They never dreamed the pregnancy would nearly cost Angie her life.

The rest of the story tells us how Bloom nearly bled to death, after delivering triplets. Not only does this story include quotes from Angie, but features perspectives from her husband and doctor. We recognize the story’s excellence by naming it winner of the Best Feature Article: Electronic in the 2011 Ragan’s Employee Communications Awards.

Bloom’s story was part of UC Irvine Health Marketing & Communications’ 2011 “Discover Why” advertising campaign. This campaign was designed to build awareness about services that UC Irvine provides for the community. Each of the three ads in the campaign featured a patient whose life was saved by UC Irvine, says Thy Ry, who submitted this entry.

Even though this article was part of an advertisement campaign, the story didn’t reek of blatant self-promotion. The story was about the Bloom family, but this paragraph snuck in what UC Irvine Healthcare is capable of:

UC Irvine Medical Center, ranked one of the nation’s top 30 hospitals for gynecology, has the only high-risk maternal-fetal program in Orange County. It also has one of Orange County’s highest-level neonatal intensive care units, which means that it was equipped to give Angie and Steven’s daughters the kind of care and attention they would need if they were born prematurely. In fact, UC Irvine Medical Center is the only hospital in Orange County with both services under one roof.

The story was a hit among readers, too.

The average page view for feature stories is around 1,500. Since December, this story has been viewed about 8,000 times. In addition, the video that was taken of the Bloom family received close to 500 views—more than any other video on the UC Irvine Healthcare YouTube channel.

“I could see the doctor next to Angie. He was standing in a pool of blood just a minute after the last child was taken out,” Steven remembers. “Everyone went into emergency mode.”

You can’t get a quote like that by emailing a source.

So, it was no surprise to find out that the UC Irvine Healthcare marketing team conducted several phone interviews with the Bloom family and even visited them at their home to understand what the young family went through.

We liked the end of this story, too. It’s almost as good as its beginning:

The triplets are thriving, too. They are now sitting up and teething. Angie and Steven are reveling in their new role as parents, joking that “anything they sell at Babies R Us, we’ve got three of it.” They tell the girls apart with a dab of paint on a big toenail: Stevie has pink, Lauren has blue and Elise is polish-free.

They’re grateful the girls were born at UC Irvine.

“It’s abundantly clear that if Angie wasn’t at UC Irvine, I’d be raising three kids on my own,” says Steven. “Things definitely would have turned out differently.”

To view the winning work please click here and here. 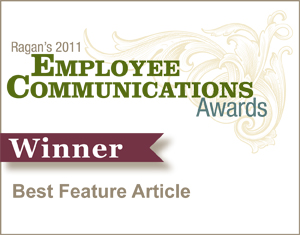