An executive retires. Big deal, right? For lots of companies, a list of his accomplishments and a pat on the back are all a communicator needs in order to patch together an item to fill space on the intranet.

Georgia Power‘s Meredith Leigh Knight and her editors didn’t do that. They got to the core of Mickey Brown, who started at Georgia Power as a junior engineer and retired as senior vice president of the customer service organization.

Knight’s article notes that one incident from his early days stuck with Brown for the next four decades. When his general manager caught him speeding in a Georgia Power car, the manager threatened to send Brown to the tiny town of Attapulgus, Ga.

Brown remembered Attapulgus and would bring it up often. Knight’s profile of Brown starts with that anecdote, but it goes on to discuss his education, his family, his love of animals and work with Zoo Atlanta, as well as his appreciation for a 1951 Chevrolet pickup truck that his co-workers got for him.

You’d think the story itself would be enough, but that wasn’t all employees got. A photo collage showed Brown over the years, and a sidebar gave the text of a proclamation the mayor of Attapulgus made upon giving him the key to the city for being the town’s “public relations flack extraordinaire.”

Georgia Power employees, from linemen to top executives, responded to Brown’s story, flooding him with emails of appreciation. Our appreciation, too, for a story well told. 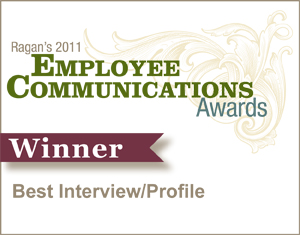