There’s no secret formula to why an article works.

Champion Technologies’ story, “One crisis. One Champion” about a massive wildfire that scorched Slave Lake, Alberta, had all those elements—and more—as the winner of the Best Long Feature Article in the print publication category of Ragan’s Employee Communications Awards for 2011.

Twelve of Champion’s employees suffered damage and two lost their homes completely to a wildfire that scorched one-third of the town. The company matched the $27,000 employees raised to help those affected.

Rather than write a story about its fundraising efforts, communicators chose to put a human face to Canada’s second-worst disaster. The staff spent hours unearthing a powerful firsthand account.

The feature began,“Trevor Vance had no plans to evacuate,” and walked the reader through his realization that his house was on fire, forcing him to flee with his wife and two children. His home was destroyed within 45 minutes. Writers aptly conveyed Vance’s emotions before, during, and after the wildfire.

“I don’t think words can really explain how you feel. You’re crushed. You show up with the clothes you have on, and that’s all you have left. You start from zero. When I saw it was gone, I had my five minutes where I sat in my truck by myself and had a big cry, and then I had to take care of my family and step up.”

Quotes such as that certainly put a face to donations from Vance’s colleagues. It isn’t until midway through the story that we learn about the fundraising effort and other measures Champion took to help Slave Lake employees.

Coupled with the text were well-chosen photographs, captions, graphics and pull quotes. Champion asked employees to submit photographs of the disaster and the aftermath. A smoke- and flamed-filled sky, as well shots of homes engulfed in flames only augmented the narrative.

Not only must you have a story worth telling, but you must know how to tell it well. And Champion Technologies did both. 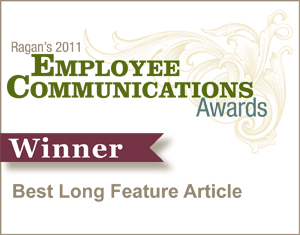