Penn State University’s U Report is as cross-departmental as it gets. Created, hosted and managed by three staff members from different departments, the podcast mirrors school culture more than any departmental strategy.

The diversity of faculty, students, administration and others on a major campus provide the hosts with tremendous fodder. The hosts sound natural—nobody reads off a script—and enthusiastic.

Looking back over the show’s archives (maintained on the free blogging platform, Posterous), the producers have interviewed organizers of the largest student-run philanthropic event in the world, a food science professor about a course in ice cream, members of the university’s Paranormal Research Society, the head coach of the men’s basketball team, and many others.

Hosting the show on a blog—considered a basic in podcasting circles—is great, but using the free, public Posterous site (which also plays any audio through its own player) avoids the hassles of dealing with University IT. It also lets the hosts share visuals in addition to audio, and allows listeners to easily join the conversation through commenting.

The show itself is produced on a small budget (staffers aren’t paid). A Mac and a USB microphone cover the hardware (except for pictures, shot with an iPhone). This show has attracted the attention of the mainstream university media.

If only organizational podcasts with budgets could be as entertaining, thought-provoking and engaging as the U Report. 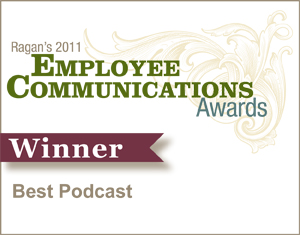