We all know how crazy it can be to move to a new home or office. Now try relocating an entire hospital—patients, staff, and equipment—to a new site two miles away.

If there’s one department that will make the move a success, it’s communications.

Princeton HealthCare System proved this with its move to a new facility, rolling out an initiative called the Ulympics. By educating its workforce, the provider smoothed the move for its customers.

Princeton hosted a series of events that educated employees about the move while making it fun. Comms knew the hospital staff was extremely busy preparing for the move, and the department didn’t want to be a distraction.

To prepare for the move, the hospital group established an Olympics-themed initiative that included an opening ceremony and a fake torch-lighting, further events, and a final closing ceremony in April 2012.

Staffers offered information at dedicated tables about what the team was working on, and teams had employees play games that related to communications goals. Marketing, for instance, conducted a Jeopardy-style game providing facts about the new hospital, while the medical staff readiness team’s table contained the childhood game Operation.

Where there are goodies, employee-moochers will gather, so snacks were offered, and staff used the time to socialize and unwind. Off-site locations also received goodies and giveaways at the events. Participation grew as the events went on, and employees began asking when the torch would visit their site.

To keep the theme going throughout the year, a Ulympics torch visited four different departments each week.

Princeton reports that the events “reduced the number of questions about certain topics and helped employees feel included in preparing for the move.” 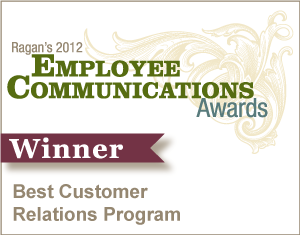