According to its company blog, the United Parcel Service (UPS) delivered more than 28 million packages around the world during the holidays in 2012. And although consumers would love to assume that all those packages are treated with kid gloves, they occasionally learn that when it comes to those shipping and handling charges, the handling sometimes take second billing for a reason.

The answer was a yearlong campaign called “Be the Brand,” aimed at educating and reminding drivers that they are the face of UPS day in and day out.

Beginning as an experimental program to capture UPS drivers’ relationships with their customers in real life and on actual routes, the effort evolved to include the first-ever video UPS has produced entirely from smartphone footage. Entitled “UPS Drivers Rock!,” the “pilot” video was shot in Atlanta using only Samsung Galaxy SIII camera phones to capture 100 percent unscripted communication between UPS drivers interacting with their patrons:

Once complete, the video was promoted and posted on UPSers.com, the company’s employee intranet. The YouTube link was also shared on the UPS Facebook page.

The video has since become one of the company’s most successful social media hits, becoming the fourth most-watched clip in the last six months on the UPS YouTube page, as well as the third most-watched on UPSers.com for the same time frame.

So while UPS may be used to delivering packages to customers, with the launch of its “UPS Drivers Rock!” campaign, the company proved it could deliver for its employees, as well. For that, we congratulate UPS, honoring its effort with Ragan’s 2012 Employee Communications Award for Best Use of Social Media. 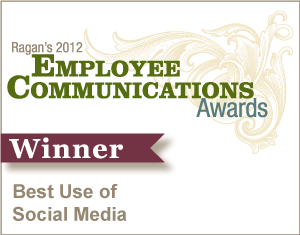