An artistic eye, skill with the camera, and a retro color scheme earned the U.S. Department of Labor top honors in Ragan’s 2012 Employee Communications Awards in the Best Photography (Print or Electronic) category.

In March 2012, Secretary of Labor Hilda L. Solis and others participated in a re-enactment to commemorate Dr. Martin Luther King’s 1965 march from Selma to Montgomery and bring attention to the continuing struggle for the rights of immigrants.

In its photos, the Department of Labor team wanted to create images that would capture the emotions of the earlier march and help viewers to “connect the dots between the past and present.”

Using sepia-toned images tinged with color, the photographer captures iconic faces, linked arms, overcast skies, powerful shadows, and a legion of feet, marching forward in determination. The photographer’s skill at his craft shows in the angles he uses for impact, the way he works with the lighting, and the expressions he captures on his subjects’ faces.

In its photo entry, the Department of Labor does as it intended. It creates a bridge across time that ties the past with the present and shows the resolve of people marching toward common goals—with images powerful enough to be viewed as works of art.

We congratulate the team that collaborated on the winning effort: Gary Fabiano, photographer; Carl Fillichio, senior advisor in the Office of Public Affairs and Communications; and Clarisse Young, special assistant. 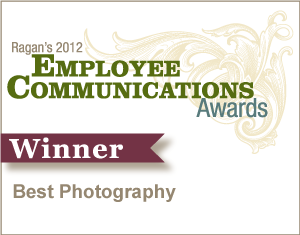