You always hear that there’s power in numbers.

Unfortunately, the same can’t always be said about the number of pages found in an organization’s annual report. The longer it is, the more taxing it is to get through, and chances are, the likelier employees won’t take the time to do so.

Clearly, Omaha Public Power District (OPPD) would already have a handle on all things power, but as it soon demonstrated, the Nebraskan entity also has a great understanding of corporate communications.

Following 2011’s destructive 500-year flood of the Missouri River, OPPD wanted to relay the message that it had fought back thanks to the dedicated labors of its workforce. A “Recharged” annual publication was just the means to do that.

This would be the theme for OPPD’s 2012 financial report, providing a comprehensive year in review for all employees, bond holders, retirees, and elected officials, as well as residential and business customers.

Having made thoughtful cutbacks in the face of natural disaster and internal challenges, OPPD had still continued to further its environmental and customer service efforts throughout the year, and wanted to highlight the milestones it and its staff had achieved.

Part of those initial cutbacks, however, included a slashed printing budget.

Working with a freelance writer to pen stories focused on employee actions, the company’s corporate marketing and communications team relied on a meticulous selection of strong photography and previously published internal works that it wanted to include in order to help offset spending. Design was also brought in-house, and the number of printed reports was reduced, using CDs and a PDF format for the bulk of its distribution.

Just as it had proven during the flood, its team worked together to not only tackle its hurdles, but also come out on top in the end.

Sent out on schedule, the report was more than well-received by both internal clients and external auditors, with the final result providing more than just financial information. It gave an all-encompassing snapshot of OPPD’s 2012 operations presented in a straightforward fashion that humanized both the company and its crew.

For that, we congratulate OPPD, naming it our selection for Best Annual Report in Ragan’s 2013 Employee Communications Awards. Well done. 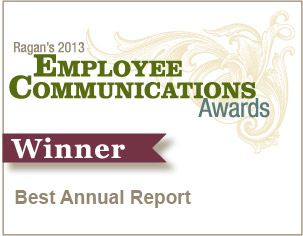