Scheduling a colonoscopy. Signing up for health care benefits.

Now, there’s a toss-up. The two are probably equally enticing to your employees.

ExactTarget took a page from Mary Poppins and adopted the “spoonful of sugar” approach by injecting (sorry!) a little humor into the registration campaign.

So, what was the magic medium? Video, specifically movie parodies.

Working with TrendyMinds, the company tapped one of its own, the gregarious Joel Book—a veteran public speaker with a vivacious on-camera presence—as its “Official Open Enrollment Spokesperson.” Then the fun began, with the following spoofs:

Other communication channels (email, postcards, etc.) adapted and/or promoted the video format to convey the importance of employee sign-ups. There were also live information sessions, with video screenings that served as a warm-up act for the live speakers.

As ExactTarget reports, it was the most successful effort in company history, achieving these remarkable results:

It’s hard to argue with that kind of success, so we won’t.

Instead, bravi to the teams at TrendyMinds and ExactTarget for finding a way to make benefits enrollment fun—and supremely effective. 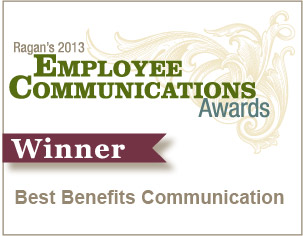