In a company that builds technology to launch into space, the engineers working on the big projects tend to get the lion’s share of the attention.

It featured a model-building shop, which not only builds scale models of spacecraft and space instruments for marketing to show off, but also supports the engineers and designers with 3D printing.

The judges agreed that Ball Aerospace is this year’s winner for Best Feature Article (Electronic) in Ragan’s 2013 Employee Communications Awards.

The article by Dave Beachley, titled “Company’s model shop earns large-scale return from small-scale models,” takes readers backstage to a fascinating area that space buffs may not think about when a new rocket blasts off or a satellite is launched.

One of Ball Aerospace’s objectives in internal comms has been to feature employee teams that do important work, but are seldom recognized, on its news intranet, called the Front Page.

Any kid who has ever built a model can imagine the fun of the “Santa’s workshop” atmosphere, where many first-time visitors ask, “Can I work here?”

But the story makes clear the serious role the three employees play in supporting the company. And as any organization can tell you, it is often the unsung heroes who keep the wheels turning. 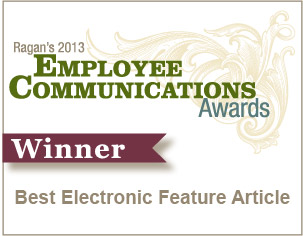