It was the 35th anniversary of FactSet, a multinational financial data and software company headquartered in Norwalk, Conn.

How to mark the occasion in the annual report? The company created a report that blended its history with highlights from fiscal 2013, telling its story in an engaging way so employees would better understand how FactSet works and how they fit into it.

The report hit its mark, FactSet states. Readership among the company’s 6,000 employees in 28 global office locations was the highest of any of the monthly e-newsletters in 2013.

The report explained financials, gave history about the founders, discussed the employees themselves, and celebrated company culture and community outreach projects.

The report was released on Sept. 25, 2013. An announcement was emailed to all employees, and it was further promoted on the company’s enterprise social network.

A follow-up survey revealed that 68 percent of respondents valued the report, and 85 percent would like to see an employee annual report every year.

“The style of the report was conversational and concise,” FactSet states. “The tone struck a balance between being positive and upbeat while still being genuine.” 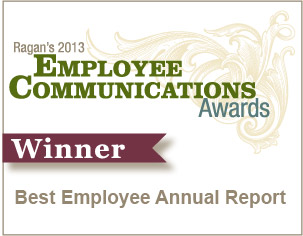