Change calls for consistent communication with a workforce in order to be successful. When biotech company Genzyme was acquired by pharmaceutical firm Sanofi in 2011, it needed to introduce employees to the newly formed Executive Leadership Team—17 leaders around the organization responsible for strategic oversight and day-to-day operations. The blog Genzyme created, “Genzyme Today: A Conversation with the Executive Leadership Team,” was intended to increase the visibility of the new team, facilitate two-way communication, and build relationships with employees. It succeeded, and won first place for Best Executive Communication in Ragan’s 2013 Employee Communications Awards.

Rather than highlight just one leader, the blog has multiple authors, providing a continuous flow of news and visibility for the entire team. Employees can subscribe to the blog to receive email alerts as soon as a new entry is posted to the site, and they have the opportunity to “like” or comment directly on the blog post. Unlike many corporate blogs, these posts are actually written entirely by members of the ELT.

Writing about courage, for example, in a blog post titled “What doesn’t kill you makes you stronger,” CFO Marc Esteva says: “Senior leaders (in the business world, like in politics) are exposed to the risk of people only agreeing with them just because they are the leaders. … Confrontation of opinions, challenge, and dialogue undoubtedly lead to better decisions. But it takes courage to disagree, as you are exposing yourself, taking risks. You will never be able to develop as a leader without having the courage to disagree.” (Emphasis in the original)

Kudos to the executives as well as to Dianna Solimine, Kate Chase, and Genzyme’s Executive Leadership Team for developing an executive blog that employees will actually read and appreciate. 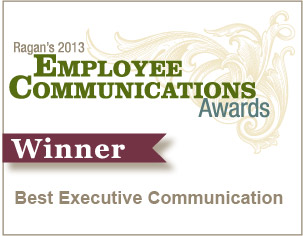