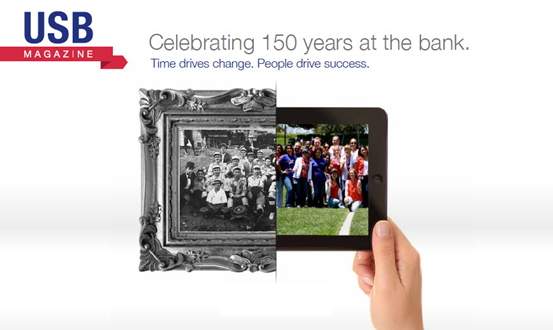 For U.S. Bank’s 150th anniversary in 2013, the internal communications team wanted to do something special with its annual publication, USB Magazine. It succeeded in producing an edition that captures the organization’s history and brings it to life, earning it first place for Best Magazine (Print) in Ragan’s 2013 Employee Communications Awards.

Since bank history isn’t inherently exciting, team members didn’t want to bore employees with a dull recap of mergers and acquisitions. Instead, they used their most powerful communication tools: photos and stories. In late 2012, they began a hunt for old photos and artifacts from the hundreds of local banks that make up U.S. Bank’s heritage. In addition to a general intranet request, the team reached out directly to leaders in 70 locations. At virtually every site, bankers tracked down historic photos hanging on a wall or tucked away in a drawer or vault.

The result: a colorful, lively magazine packed with images and facts. One of the main themes of the publication is a series of “Then and Now” spreads showing the development of money, bank service, security, and other pertinent topics related to banking over the years.

Promoting the sesquicentennial issue to employees was a priority. Since the sesquicentennial fell on a Saturday, an email invitation to the e-magazine was sent to all 66,000 employees on Friday, July 12, 2013. The team also promoted the magazine and related employee contest via its intranet news site. To encourage employees to spend time reviewing the magazine, they offered a “Then and Now” prize package of a photo album and iPad Mini for randomly selected winners who accurately completed the USB Magazine quiz.

Online metrics showed a 581 percent increase in page views over the 2012 edition of the magazine, with an average time spent on the site of 31 minutes. The editorial team also received 7,930 responses to the reader quiz/survey. Feedback was 97 percent positive, with compliments such as “Virtual high five!” and “I love everything about this!” 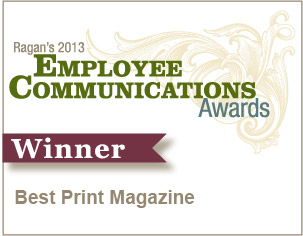