At Aon, Yammer was a solution to a challenge: Make employees’ knowledge and expertise more accessible while enabling collaboration. It was also only one part of a solution that encompassed other objectives, including a culture change that supports knowledge sharing.

The introduction of Yammer was part of a bigger intranet launch that improved internal communication and simplified access to volumes of organizational content. Among the ways Aon ensured adoption was to make certain that leadership was on board, supporting the social technologies and completing their own online profiles, setting an example for the rest of the organization.

These demonstrations of support were bolstered by a comprehensive marketing-style campaign to build awareness and encourage use. Among the marketing-style tactics employed was a $1 charitable donation for every Yammer post that included a designated hashtag during a daylong event.

As a result of these efforts, nearly 2,000 Yammer groups were created, and in one month more than 10,000 messages were posted. Some 42,000 employees completed their profiles, which received 200,000 views during a single month. More than 13,000 employees engaged on the network in a single month, a far cry from the many Yammer ghost towns plaguing organizations that didn’t think as strategically as Aon. 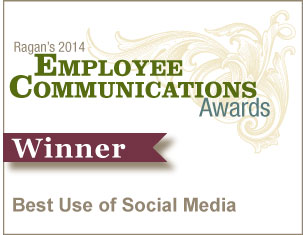