Con Edison has also developed dozens of diversity and inclusion programs that resist statistical analysis but still bring to life Con Ed’s principle that true diversity and inclusion mean far more than simply being employed—or promoted. But the organization’s 2014 Diversity and Inclusion Report boasts very solid traditional numbers to back up its claims that diversity and inclusion form two of its most important corporate values. That’s why Con Ed has won the “Best Annual Report (Electronic)” category of Ragan’s 2015 Employee Communications Awards.

The very title of this year’s report says outright that “diversity” is not enough—there must be a culture of inclusion in every department, business unit and corner of Con Ed.  That attitude is borne out by every paragraph of this uncompromising annual report.

Minorities make up 45 percent of Con Ed’s workforce and accounted for 48 percent of all promotions in the organization in 2014. In 2014, the Con Ed initiated several courses and workshops to increase awareness and understanding of diversity and inclusion, introducing a new diversity and inclusion workshop at 24 work locations to “accommodate business staffing needs.” More than 370 Con Ed employees attended these new workshops.

Congratulations to the Con Edison communications team and especially to the Diversity and Inclusion 2014 Annual Report team! 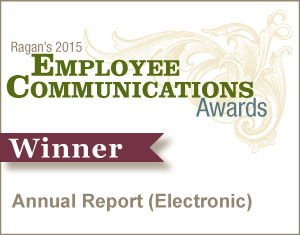