In 2011, InnovAge—a provider of health care for the elderly—adopted its new name based of the concept of “innovating aging.” A brand campaign in 2015 sought to reintroduce the organization to the public. As the time rolled around to produce an annual report, InnovAge decided to move beyond the conventional printed report directed at external audiences to one aimed at employees. The report has won InnovAge first place in the “Annual Report” category of Ragan’s 2016 Employee Communications Awards.

With more change in the works (including the transition from being a nonprofit to a for-profit company), the team opted to use the annual report primarily as a means of communicating with employees about the year’s innovations and successes, and also about the organization’s future. Using a storytelling approach designed to connect audiences to the brand in a more personal way, the report featured coverage of each of the organization’s business lines, helping employees grasp the part they played in the narrative and how the various businesses connected to achieve big-picture business goals.

The team also decided to make repurposing the annual report easier, with various sections able to serve as standalone communication; parts of the report are shared independently in the organization’s internal email newsletter. By creating an attractive digital version of the report, InnovAge was also able to ensure online audiences had access to it, expanding the reach well beyond the limited list of recipients of the print version.

For reimagining what an annual report can be, kudos to Christina Pope, Elizabeth Moroney and Robin Doerr. 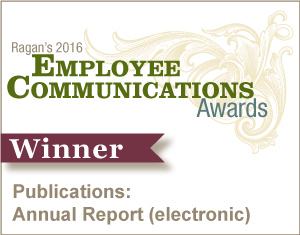