The previous program let employees earn cash for participating in qualifying health and well-being activities, but it wasn’t reaching its potential.

To increase participation, the university started out by eliminating the need for employees to complete a questionnaire. Instead, employees would simply have to complete two activities to receive the $100 cash incentive.

The move paid off. In 2016, 22,490 people completed the questionnaire, but not even half finished a single activity. Dropping the form resulted in more than 10,500 completing one activity and 5,116 finishing two.

To get the word out, the communications team developed a campaign that included recruiting spokespersons from among the employee population and featured them (and the program incentives) in a number of vehicles that ran the gamut from print to video to social media—all at a cost that didn’t exceed the previous year’s budget.

The execution of the campaign was creative, yet focused on the real people selected to represent the employee population, driving results that were aligned with the program’s goal of increasing participation. 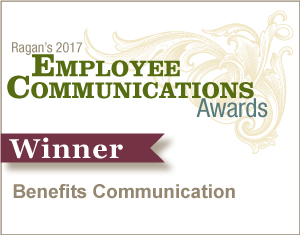